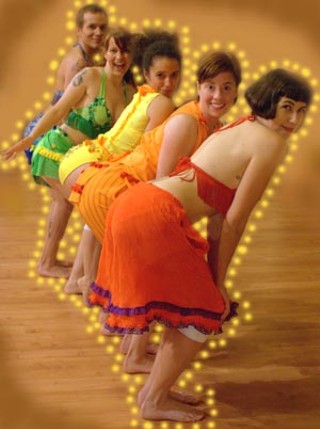 This is called a "Tango Spank Line." It only makes sense if you're sozzled.

Broken Clock Cabaret's wildly successful Inside a Broken Clock: A Tom Waits Peepshow takes a third trip through the barfly bard's booze-soaked repertoire this weekend, a warm-up for the 16-member company's Bay area trip later this month. Producer Rick McNulty promises even more sleaze this time around. "This year we've added a guy in drag, another burlesque number, and we've made the puppets bigger," he says. Overseeing the peep show, a hodgepodge of dance, comedy, vaudeville, and puppetry set to the No Salvation Army Band, is a full-time gig for McNulty, who originally envisioned a "creepy kids' show" with partner/peep-show choreographer Ellen Stader on a hazy road trip to the Rio Grande Valley. Inevitably, such intimate association with Waits' material has led to a revelation or two. "He's gone a long way from his bad-liver-and-broken-heart period," McNulty says. "He's much deeper, for lack of a better word, and darker." However, he hastens to add, the idea is to entertain the audience, not depress them. "We could just as easily do a sad, somber sort of production, but who wants to see that?" he says. "We focus more on the carny aspects of his songs, try to reach in and strangle all the black humor out of it we can." Showtimes are 8 & 10:30pm tonight (Thursday) and Friday at the Parish. A limited number of $15 tickets will be available at the door.

Anyone wanna buy a club? (Photo By John Anderson)

• Details are sketchy, but last month, punk/emo/metal haven Redrum shut down literally overnight. A bartender showed up to work one evening to find the creek-side club at 401 Sabine locked up tight. Accounts of what happened vary – either the property was sold or the club defaulted on rent – but either way, Redrum's demise leaves Red 7 as Austin's all-ages central.

• The Victory Grill, 1104 E. 11th, has a busy Juneteenth weekend on tap: lip-smacking barbecue from Clifford's and lip-smacking blues from Contact, Urban Soul, and the Big Daddy Bluzz Band (Friday) and Two Blues, Richard Earl & the Original House of Blues Band and San Antonio sax legend Spot Barnett (Saturday). Doors at 6:30pm, tickets are $20 (cash only), and proceeds benefit the historic venue's ongoing restoration. Sunday, the party moves to Central Market, 4001 N. Lamar, for a 12:30-9:30pm fiesta with the Bells of Joy, Texas Eastside Kings, Blaze, and a poetry slam. That one's free.

• Nothing says rock & roll like spending all day in a classroom, right? In this case, yes: Girls Rock Camp Austin still has room in its two-week program June 18-29 at the Lone Star School of Music, 2824 Real. For a boatload of babysitting money ($750), girls ages 8-17 will learn about African drumming, instrument making, and music "herstory," plus hands-on instruction from local musicians Rachel Loy, Sarah Glynn, Rosie Flores, and director Emily Marks. Call 809-7799 for details.

• So long, suckers: TCB has accepted a job as assistant music editor at the Houston Press, a blissfully brief walk from Minute Maid Park, so his last column will be June 29. It's been real, y'all. 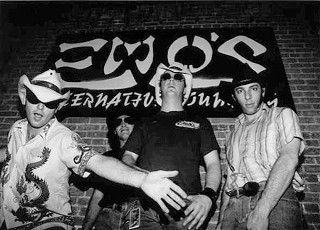 The incomparable Supersuckers, who, along with L7, Jesus Lizard, Cows, Cherubs, and a few others, was one of Emo's unofficial house bands in the early years

Emo's enters its 15th-anniversary week this week (see Music Listings) as an anchor of Red River and pillar of the local music scene on par with Antone's or the Broken Spoke. But it wouldn't exist at all if not for dollar-drink Tuesday nights in the late Eighties at Lola's, the revered gay biker bar in Houston's freak-friendly Montrose district.

Lola's was the after-work lounge of choice for the staff of Clubland, a disco in the nearby Tower Theater that hosted occasional roadshows (Beastie Boys, Julian Lennon). Manager Eric "Emo" Hartman, a recent Chicago transplant, and bartender David Thomson both preferred the eclectic vibe at Lola's to Clubland and began tossing around ideas of opening their own place.

"It was the best cross section of people I'd ever seen in my life," says Thomson. "Gay bikers, models, punks, frat guys, sorority girls, businessmen, and the best jukebox in the area."

Emo's Houston opened in a decommissioned orphanage around the corner on Dec. 31, 1989. Within 72 hours, Thomson says, it was "wall-to-wall." Though it wasn't set up for live music, Hartman was friendly with several Chicago bands and let them play the bar when their gigs at other Houston clubs fell through. One thing led to another.

"It kind of took on its own life," Hartman says. "I started doing a couple of shows here and there, and all of a sudden their booking agents are calling me because the bands are saying, 'Hey, he takes care of us.'

"What we lacked in venue size we made up for in hospitality."

Word quickly filtered back here, and Hartman opened Emo's Austin in May 1992 in a former country & western bar. He inherited a room full of wagon wheels and animal heads on a part of Sixth Street that even made criminals nervous. It was the perfect place for Austin's outcasts and misfits to congregate, particularly since there was never a cover.

"I just wanted to do something cool," Hartman says. "I grew up in the punk scene in Chicago, working at the Metro and Vic Theatre, and saw shows that cost money. A lot of bands wouldn't play at those places because they weren't big enough, and I thought if we did shows for free, there'd be a lot of bands who people wouldn't want to pay $5 or $10 to see, but if it's free, they'd come check it out. I really depended on the bar sales."

Emo's is a much different place today, of course. Thomson watched the future owners of Lovejoy's, Casino el Camino, and the Electric Lounge studying the club, literally taking notes in some cases; each of those places couldn't help but cut into Emo's customer base. He chuckles recalling the "uproar" that resulted when Emo's instituted a $1 over-21 cover charge around 1994. Then Stubb's opened in 1996, and its significantly deeper pockets lured away many bands who had been playing Emo's for years. Hartman, weary of coming home at 5am and being awoken by his young daughter two hours later, finally sold the club to Frank Hendrix in 2000. He does admit feeling the occasional twinge of regret.

"It was my baby; it's still my name on the wall. I miss it, and I don't miss it," says Hartman, now a regional manager for the Texas Land & Cattle Company steak house chain. "Today, the way things are – the no smoking and this and that – I don't miss those hassles. But it was nice being my own boss."

Thomson, for his part, suggests that anyone looking for a glimpse of what Emo's was like in the beginning need only walk a block or two up the street.

"The one club that reminds me of Emo's [back then] is Beerland," he says. "[Owner] Randall [Stockton] is providing great, cheap entertainment for people who don't make a lot of money."

(Did we mention that Beerland and Room 710 both mark their own anniversaries next weekend?)

"That's why I think I like Randall so much," Thomson continues. "He reminds me of Eric and I 15 years ago."