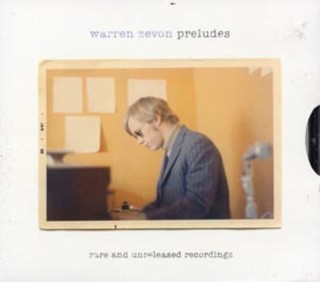 Fans of Warren Zevon are no doubt feeling barraged of late. Rhino reissued three of his albums earlier this year. Then there's his biography, I'll Sleep When I'm Dead, an oral history drawing raves from both music and literary critics. Now comes Preludes, a 2-CD collection of early home recordings and demos culled from a huge stash discovered by his son Jordan when he was clearing out a storage space. While the sound quality is less than ideal in spots, that's balanced by stirring melodies and heart-tugging lyrics that were, and remain, Zevon's forte. Preludes consists of either previously unreleased tunes or songs that later appeared on his first two late-Seventies albums for Asylum, Warren Zevon and Excitable Boy, while one cut dates back to 1969's Wanted Dead or Alive. Zevon, who died of cancer in 2003, hung with the mellow crowd that included Jackson Browne, the Eagles, and Linda Rondstadt, but his world-view, and thus his writing style, was bleaker than anyone who hung out in sunny Southern California to "Take It Easy." Highlights include an immensely enjoyable, reggae-fied version of "Werewolves of London," a "Poor Poor Pitiful Me" that's straight out of Zevon's garage, and a surprisingly desolate "Carmelita." Of the unreleased songs, "Studebaker," "Stop Rainin' Lord," and "The Rosarita Beach Café," would've been worthy additions to Zevon's early studio albums. Unfortunately, all the session information has been lost, but the package does contain brief excerpts from I'll Sleep When I'm Dead, which allows, once again, folks like Springsteen and Browne a moment to explain why Zevon was one of the most important songwriters of our time. There's a second disc with an Austin connection: an interview with Zevon by Jody Denberg, plus "Don't Let Us Get Sick," recorded live during KSGR's anniversary party in 1999.