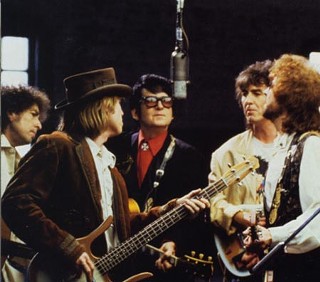 It's been nearly 20 years since the Traveling Wilburys proved what a true supergroup could accomplish when there are no egos involved, just friendship. The Wilburys were George Harrison, Bob Dylan, Roy Orbison, Tom Petty, and Electric Light Orchestra's Jeff Lynne. Though they managed only two albums, impishly titled Volume One and Volume Three – the second without Orbison, who died shortly after the first was released – each is a charmed collection of jangly folk-pop and good-humored rockabilly that eclipses nearly anything any of them were doing as solo artists at the time. Both LPs have been out-of-print for more than a decade, and on The Traveling Wilburys Collection, Rhino offers two discs with two unreleased tracks on each, as well as a DVD featuring a home movie made by Harrison, and five videos. Thanks to the air of camaraderie that permeates both volumes, the music remains timeless. Alternating lead vocals and harmonizing with startling effectiveness, they turn tunes like "Handle With Care," "End of the Line," "Where Were You Last Night?," and the overtly Beatle-esque "New Blue Moon," into a frolic that's irresistible. Lynne and Harrison's production values, as expected, are a little too polished at times, but the talent and the songs are sturdy enough to withstand such treatment. Besides, the devilish bop of "Wilbury Twist" absolves them of any other misdemeanors. The true bonus of The Collection is a little film put together by Harrison, " The True History of the Traveling Wilburys," an in-the-studio glimpse of the five. It confirms the affable nature of the project, while offering delights like them working out their parts around a microphone and Dylan in a rare moment of ease.