Anyone who's worked in film or video production knows it's 90% standing around, and TCB stood around a lot last Thursday as an extra in "The Underdog," the first video from Spoon's forthcoming Ga Ga Ga Ga Ga. Directed by Kevin McAlester (Roky Erickson: You're Gonna Miss Me), the clip is one continuous tracking shot around a busy recording studio, patterned after Jean-Luc Godard's Sympathy for the Devil. At least there were plenty of cool people to talk to: the Wannabes' Hunter Darby and wife Julie, Karaoke Apocalypse bassist Chepo Peña, Trail of Dead drummer Jason Reece, the Black frontman David Longoria, musical siblings Pink and Black Nasty, Soft Action photographer Courtney Chavanell, Texas Monthly writer John Spong, and Grace Vroom, 17-year-old incoming senior at the Episcopal School of Dallas, whose brother is McAlester's best friend. A brief diary of the day:

11am: TCB arrives at Tequila Mockingbird, reads Blender for a half-hour.

11:30am: Video stylist Leyla Borahoo chooses TCB's Sopranos-style bowling shirt over his guayabera, which has "too many lines."

12:30pm: TCB is finally cast, as a maraca player on the patio with Vroom and Black Nasty. Naturally, the only three people with outside roles are wearing all black. "It may be too bright out here," McAlester admits.

1:15pm: A mariachi band shows up just as we break for lunch. TCB and Darby, who plays the producer, talk baseball over a pint at the nearby Dog & Duck, which he manages. "I'm playing it like I'm a little put out," he says. "I just pretend I'm back here."

2pm: First run-through. Black Nasty is MIA. TCB and Vroom will be onscreen maybe two seconds when Darby opens the door and motions for us to play louder. Showbiz!

2:45pm: TCB asks singer Britt Daniel, "Are you sick of this song yet?" He's taken aback. "No! Are you?" Hardly. "I Summon You" with horns; expect to hear "Underdog" a lot this summer.

2:50pm: Vroom is informed her tambourine playing should be more "deadpan." 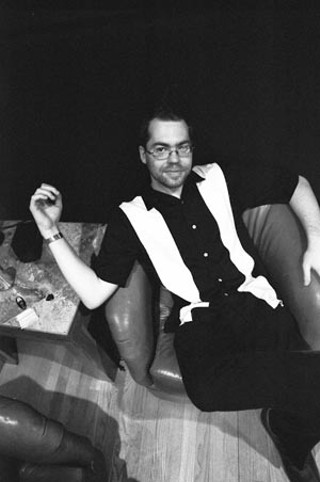 Someone Something: TCB is ready for his close-up (Photo By Courtney Chavanell)

3pm: Someone not in the band breaks into the beer clearly marked "Beer for band." It's about time.

5pm: TCB discovers the sheet music to Survivor's "Eye of the Tiger" in one of Tequila's control rooms. Score!

5:20pm: Production sags. McAlester cuts before our door opens three times in a row. TCB: "How far did they get that [last] time?" Spong: "Not very."

5:30pm: The walkie-talkie we use for a cue cuts out, and we totally blow the take. Still, we're turning into a pretty tight rhythm section.

6:30pm: One of the mariachi players has to leave to play piano at his church. Although it's a sin, we envy him.

7:41pm: That's a wrap! TCB begrudgingly gives his maracas back, and Spoon invites everyone to come help them spend some of Merge's Arcade Fire money at El Mercado. Not a problem.