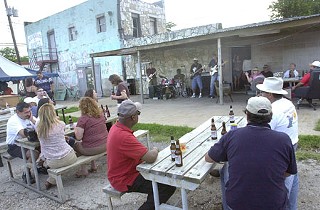 That esteemed perennial of Austin music, the Blue Monday jam session, has a new, somewhat unlikely home: Rabbit's, the bunkerlike cinder-block corner bar at Sixth and Chicon. "I've been here since 1969, and it's been the same ever since," says owner R.G. "Rabbit" Durand. The 7pm sessions, dotted with R&B nuggets like "Further on up the Road" and "Things That I Used to Do," are led by septuagenarian and Texas Eastside Kings drummer Willie Sampson, and word of mouth has spread quickly after only three weeks. "We started with about four or five people who dug it, and the next week it was twice that," says guitarist Mike Keller, who recently joined Marcia Ball's band and also plays with Sampson in the Explosions. Rabbit's regular Richard Padilla helped arrange the new Blue Mondays and sees them as a way for longtime residents of his rapidly gentrifying Eastside neighborhood to reach out to their new neighbors. "We're going to grow with the community," he says. As for rumors the bar itself has been targeted for redevelopment, Durand says not so fast – at least not yet. "[Developers] made an offer, but that's all," he says. "I'm 74 years old. I still make a little bit of money."

A hickory wind, if you will, has blown Gram Parsons' daughter, Polly, our way. "I got a feeling in my gut I was supposed to be here," Parsons says of visiting Austin about three months ago. "I found a beautiful house in South Austin and bought it in an hour." Settling in with husband Charlie Terrell and 18-month-old daughter Harper Lee, she wasted no time adapting to her new home. Eddie Wilson was moved to tears reminiscing about her dad's visits to the Armadillo World Headquarters one Threadgill's gospel brunch, and she already loves the Continental Club and Broken Spoke: "I'm a little into the dancing thing." A self-described "vintage clothing freak," Parsons is also one of three partners in Roadhouse Rags, a combination vintage store/event space in a former tattoo parlor at 1400 Fortview Rd., near Manchaca and Ben White. Kelli Archer handles buying duties (so far, the shop specializes in men's shirts and purses); Clay Connell is renovating the stage area out back, where Jesse Dayton and Heybale! twang the official June 17 opening party, and says he'll eventually record bands there; and Parsons hopes to use her left coast connections and promoting experience to make the shop one of South Austin's musical nerve centers. She likens the shop's potential to the Sweethearts of the Rodeo nights she put on at L.A. bar Molly Malone's. "Eventually we had people like Lucinda Williams, Dwight Yoakam, and Robert Earl Keen stopping by, but it started out just like this," Parsons says.

After nearly four years as a prime South Congress shopping destination and occasional afterparty controversy magnet, FactoryPeople will shut down in July. Owners Le and Thomas Popov cite the familiar yen to "explore new projects" and spend more time with their family… Sweatbox Studios celebrates its new Eastside digs off Bolm Road with a free show June 10 with the Meat Purveyors, Gorch Fock, Youngmond Grand, Attack Formation, free beer, and a June-only $25 hourly rate… South First record store End of an Ear will square its footage by expanding into neighbor Vanilla Girl's space (they're going online only) starting next month and finishing, they hope, around December… Johnny Cash tribute bar Mean Eyed Cat, 1621 W. Fifth, isn't going anywhere; in fact, developers have promised to build their new apartment/retail complex around it. However, the Cat does need a new zoning permit to continue serving beer and wine. Support their efforts at www.staymean.com… Finally, live music will return to Southpark Meadows soon in centrally located restaurant area the Grove, with a 750-person capacity venue, and "family-oriented and popular rock, classic rock, or jazz/blues" as interpreted by local bands. Grove eatery Mama Fu's paves the way with patio concerts every Friday.

Consumed by the Texas Youth Commission scandal, the entertainingly futile struggle to unseat House Speaker Tom Craddick, and a budget that, as usual, didn't pass until the 11th hour, the Texas Legislature had little time for music-related legislation at their just-concluded 80th session. The lone bill to pass, relays Texas Music Office Director Casey Monahan, was House Bill 54, which makes it illegal for bands to represent themselves as such (Coasters, Drifters, etc.) unless their current lineup contains at least one original member. Of those that didn't make it, the biggest was Senate Bill 1933, filed by former Austin Mayor Kirk Watson, that would have fostered the creation of an official Texas State Music History Museum to "educate visitors on the musical heritage of Texas, display objects and information relating to the musical history of Texas, and recognize great musical artists that have contributed to the musical fabric of Texas." Watson's bill made the General State Calendar but never came up for a vote. Still, it got further than proposals to transfer the Texas Commission on the Arts to the Governor's Office, to exempt Austin classical radio station KMFA-FM from certain property taxes, and to allow Austin's Anthropos Arts to make and sell specialty license plates. Like hundreds of others, those all died in committee.

Have you seen me?

With apologies to Oat Willie's, the motto of the 36th Kerrville Folk Festival might as well be "onward through the mud." Last weekend's record rainfall in the Hill Country swamped the festival grounds at the Quiet Valley Ranch south of Kerrville, at one point cutting it off from town as Turtle Creek overflowed. Festival director Dallas Austin says that although attendance was doubtless down due to the weather, no performances were canceled, merely moved to the ranch's somewhat drier amphitheatre. With a much better weather forecast, Kerrville continues through June 10, with Terri Hendrix, Judy Collins, and a Lost Gonzo Band reunion up this weekend.

Austin's latest indie overachievers keep raking in national accolades. Voxtrot is one of three bands "Breaking Out" of Spin's July issue (Marilyn Manson cover), though Pitchfork rates debut LP Voxtrot a tepid 5.9: "[Voxtrot] stumbles from the band's enthusiastic, ambitious attempt to produce it immediately." Peek-a-Boo pranksters Peel, however, have been dubbed "a bunch of jolly honkies" by Vice and will attempt to prove as such Saturday at Emo's with Octopus Project, Palaxy Tracks, and For Those Who Know. Outside, meanwhile, expect plenty of porkpie hats and pickin' up change as Nineties ska-punk heroes Gal's Panic crank up the skank with the Total Foxes, Tricker Treats, and Catfish Hunters.

Save the tiger: TCB has learned that suspiciously soon after the Chronicle's less-than-positive review of debut LP Tiger Cry, formerly color-coordinated synth-rockers the Laughing have retired both their matching outfits and stuffed tiger mascot Svan. "They're evolving," says manager Rosa Madriz. TCB can live with(out) the clothes but believes more bands should adopt zoological familiars, not less. Talk some sense into them June 23 at the Independence Brewery's Draft Sessions.