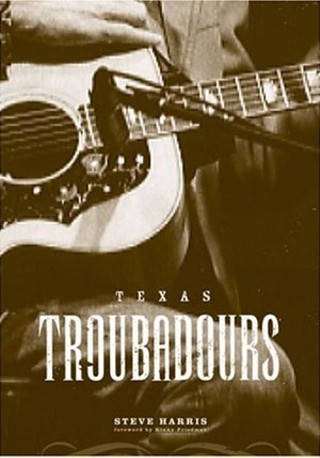 Kinky Friedman knows Lone Star State singer-songwriters. "Needless to say," he writes in the forward to Texas Troubadours, "these critters are often lonesome, ornery, and mean." Houston-based photographer Steve Harris, onetime house cameraman at Rockefeller's Nightclub, therefore shoots more than 50 of them in a saturated black and white that looks like an oil stain. In first portrait Billy Joe Shaver ("Simplicity don't need to be greased"), Harris gets close enough in that the old five and dimer's Man of God is closer to the surface than the cowpoke caricature often captured. Guy Clark's close-up is stunning as well, while Mingo Saldivar proves brown is beatific. The Continental Club's Mike Barfield gives up a portrait that might have been shot anytime between the Civil War and Deadwood. Ditto for James McMurtry's mad marauder. Jesse Dayton's matinee idol shot matches up with Rick Trevino's and Alejandro Escovedo's cattle rustler mugs. A few of the ladies – Trish Murphy, Sara Hickman, and Abra Moore – make out similarly flattered. Not so of Kris Kristofferson, Jimmie Dale Gilmore, Terri Hendrix, Robert Earl Keen, Rosie Flores, and angry frat-boy Jack Ingram. Others, like Friedman, Shake Russell, and Tom Russell, are little more than snapshots. That's when Don Walser brings a tear to your eye. Needless to say, some critters are angelic.