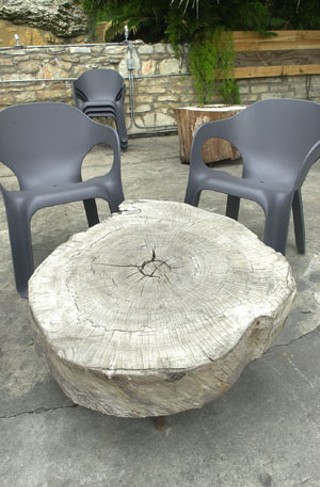 Kermit the Frog wasn't kidding: It's not easy being green. Especially if you run a bar or nightclub. Nevertheless, the resurgent environmental movement is slowly seeping into the music biz. South by Southwest went carbon-neutral this year, and the new Austin Music Hall will meet the criteria required of all new Downtown buildings under Austin Energy's Green Building Program: a reflective roof, more insulation (which also cuts down on noise), efficient plumbing, etc.

"Whether or not it was a requirement, it was something we were going to do anyway," says Eric Herron of Sixth River Architects. Construction on the new Music Hall will begin as soon as demolition of the old one is complete; all that debris will be separated and recycled.

The Mohawk, as El Charro, back in the day

The project is now slated to be complete in October, although Direct Events CEO Tim O'Connor says it should be available for private parties in September. Watching the 13-year-old structure being torn down Friday morning, he wasn't exactly nostalgic.

"I'll finally get the stage like I want it," O'Connor said. "And I will admit, for once in 13 years, that the AC in this building sucks."

Over at the Mohawk, the club is exclusively using recycled and reclaimed materials for its own renovations, a new rooftop deck and remodeled upstairs area that will be used as a green room for bands. It already has a green track record: The wood paneling inside and outside is mostly reclaimed heart pine from a barn in Llano, its tables are fashioned from trees downed in last year's storms, and most of its lighting comes from baskets of recycled light bulbs. Eventually, says owner James Moody, they'd like to convert one or both stages to solar power.

"We wanted to go with the Native American end of things, which was resourcefulness, respecting the land you live on," he says. "The only way I think to come up with something that was a unique contributor to Red River would be not go and buy your bar, but actually build your bar." Otherwise, the biggest environmental impact bars and music venues have is the massive amount of solid waste they generate. Some do have special receptacles for recyclable materials, mainly bottles and cans, but for any number of reasons, many others don't: narrow Downtown alleyways, the time and expense involved in separating garbage, the "contamination" that ensues when nonrecyclable trash is mixed in or bottles and cans are not completely drained. However, most of the cardboard these places use is recycled, says Jill Mayfield of the city's Solid Waste Services Department.

The Mohawk does separate its trash, and leaves recyclables by the curb for Red River's homeless population to redeem at the Ecology Action recycling center down the street. Austin currently has no commercial recycling program for small businesses, but Moody would like to meet with the city to discuss starting one.

"Stubb's does a really good job of it, but it's because they can afford to pay for a whole separate service," he says. "We think if a lot of venues have that luxury, we can exponentially impact recycling, just because we go through so many damn bottles and cans."

Captain Phleabag (right) is a take-charge kind of pirate. When his band the Jolly Garogers headlined last month's first-ever PyrateCon, a gathering of buccaneers in New Orleans sponsored by the International Pirate Society, Phleabag did such a good job stage managing he was named entertainment chairman for next year's convention. Besides pillaging Bourbon Street bars with Pirates of the Caribbean actress Lauren Maher ("She and I got bombed on hand grenades"), Phleabag and his mateys helped raise money and supplies for struggling New Orleans schools. "There's such a need there," says Phleabag. "People think everything's fixed. It's not even close." Back home, besides booking and running sound at the Merkaba Lounge at 14106 N. I-35, Phleabag has started a consulting business doling out advice to up-and-coming bands. A 30-year veteran of the local music scene and graduate of the Musicians' Institute in Los Angeles, Phleabag offers everything from voice lessons to help booking shows. "Once you decide to play in public, there's a bad concept that if you promote yourself you're selling out," he says. "That's just not true at all. You're trying to become a professional in a field that's very difficult to even make a dime in." Contact Phleabag at phleabag@jollygarogers.com or 586-8474, but wait until after the weekend, as the Garogers will be busy plundering various Alamo Drafthouses for the premiere of Pirates of the Caribbean: Dead Man's Chest: tonight (Thursday) at the Alamo South and Friday at the Alamo Village.

• It's Kerrville time: The 35th Kerrville Folk Festival starts today and continues through June 10. See www.kerrvillefolkfestival.com for the scoop.

• Asleep at the Wheel got a juicy New York Times write-up last week – in the business section. After years of barely making ends meet, the long-running local Western swingers hired former Steve Riley & the Mamou Playboys musician Peter Schwarz as business manager in 2001. His financial overhaul – cutting production costs, distribution deals with Cracker Barrel and HEB, investing in the Ride With Bob musical – put the Wheel back in black. "We are still pinching ourselves that we are in a growth stage," Schwarz was quoted. The Wheel's Reinventing the Wheel is out now, and Schwarz's old band stops by the Oaks in Manor Friday.

• Austin-related TV series went one-for-two in the recent round of fall renewals. NBC renewed Peabody Award-winning Friday Night Lights, moving it to Friday nights this fall. CW teen sleuth Veronica Mars, created by former Black Irish bassist Rob Thomas, wasn't as lucky, although one rumor says the show may yet be retooled and return. Thomas' old friends and frequent Mars referents the Wannabes join the reunited Doctor's Mob June 1 at the Hole in the Wall.

• Local metallurgists Shrapnel play their first show since their equipment was stolen last New Year's Eve at Red 7's two-day May Metal Fest Saturday, alongside Crowbar, Hatchetwork, By Any Means Necessary, Disfigured, and more. Also back from the dead, sort of, is Church of the Friendly Ghost, which is curating a summer music series at Salvage Vanguard Theater's new digs at 2803 Manor Rd. that begins June 12.