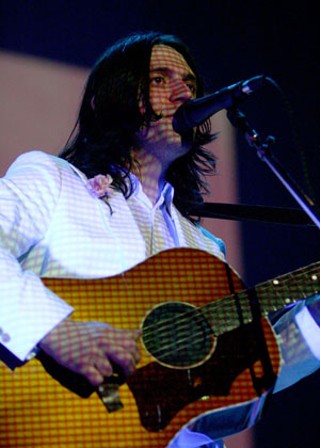 Closing out the 25th season of UT's Performing Arts Center and Bass Concert Hall's final show before the 3,000-seat venue undergoes an 18-month, $14.7 million makeover, it took only two songs for Bright Eyes to unseat the crowd. As Oberst shouted, "I've made love, yeah, I've been fucked, so what?!" on "Hot Knives," he met a zealous rejoinder, and, striking into "First Day of My Life," it became clear that since 2005's I'm Wide Awake, It's Morning, Bright Eyes has securely tapped the sing-along suburban demographic more commonly charged to Ben Folds. Opener McCarthy Trenching had a tougher sell, overwhelmed by the vast venue and still-scattered crowd, though the Omaha quartet still plied a solid folk-rock set from their self-titled debut on Oberst's Team Love label. Oakley Hall, meanwhile, attempted to start the theatre's renovations early, peeling paint in a swirl of four psychedelic guitars distilled through Sixties San Francisco harmonies. Clad in white suits, Bright Eyes emerged outfitted as an indie prom, complete with bandstand risers and flowers at the footlights, as a full-length screen projected real-time art accompaniment. The band primarily held to material from their latest release, Cassadaga, highlighted by "Four Winds" and "If the Brakeman Turns My Way," with a sixpiece orchestra and three drum kits accenting the set. "Texas taught me a lot about forgiveness. I love Texas," Oberst conceded, though he frequently seemed annoyed with the audience's enthusiastic chorus, especially their un-ironic singing to songs like "Soul Singer in a Session Band" and "False Advertising." Prematurely dismissing the band from the two-song encore, "Lua" justified his disdain, however, as the crowd's shouted lyrics overpowered the hushed acoustic tune. Oberst's popularity is now even more than he can stand.