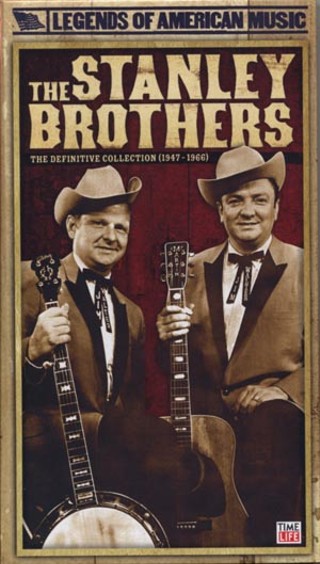 Ralph Stanley, 80, finally became a household icon with 2000's O Brother, Where Art Thou?, but who's actually heard the work he's best known for, as the Stanley Brothers, with his elder sibling, Carter? There have been label-specific compilations of the Stanleys over the decades, but the 3-CD Definitive Collection is the first to span their entire career. Over the course of 60 tracks, it offers up watershed moments in bluegrass history, songs that have become standards in the folk and country music canons, plus a handful of rarities for hardcore fans. While neither brother thought of their music as "bluegrass" – to this day, Ralph refers to it as "old-time mountain music" – they're considered progenitors of the style along with Bill Monroe and Flatt & Scruggs. Until Carter's death at the age of 41 in 1966, his vocals were a model for the high lonesome sound, and Ralph is credited with his own influential style of playing the banjo. Arranged chronologically, the set flies by with "Man of Constant Sorrow," "Rank Stranger," "How Mountain Girls Can Love," and "Don't Cheat in Our Home Town," joined by tunes that demonstrate humor ("How Far to Little Rock") and a deep spiritual side ("Hide Ye in the Blood"). The inclusion of "Sugar Coated Love," a previously unreleased live recording with Monroe from 1961, is especially notable. With an introduction by Ricky Skaggs and a biographical essay by noted bluegrass writer Gary Reid, The Definitive Collection misses only detailed session credits. Otherwise, the music of the Stanley Brothers remains as breathtaking as the day it was made.