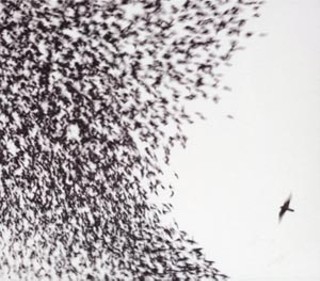 Wilco is a band born of conflict, and whether creatively or from Jeff Tweedy's depressed addictions, those tensions manifest themselves in exquisite abstractions and provocative, distortion-strafed production. With Tweedy now clean and the group at its most cohesive, however, Sky Blue Sky, Wilco's sixth studio effort, lacks both the substance and progressiveness of their earlier work. Even the title's redundancy portends a dearth of imagination. "Maybe you still love me, maybe you don't. Either you will or you won't," Tweedy shrugs on opener "Either Way," highlighting a fatalistic ambivalence that meanders throughout. The album's more collaborative songwriting results in a comfortable air, but with no one emerging to take the lead, the songs waver in an aimless vapidity. Only Nels Cline, added to the lineup alongside multi-instrumentalist Pat Sansone following 2004's A Ghost Is Born, brings true inspiration with his avant-garde guitarisms, exploding the R&B swagger of "Side With the Seeds" and, on "Impossible Germany," twinning solos with Tweedy in one of the album's few exceptional moments. The pervading Seventies-style roots-rock is otherwise familiarly arid. "Hate It Here" and "White Light" would smack of parody if not wrung with such sincerity, the former appropriately depicting the tedium of indecision while the latter shirks accountability behind banal platitudes like "If you're trying to paint a picture, but you're not sure which colors belong, just paint what you see. Don't let anyone say it's wrong." Even the infectious punch of "Walken" or blues-funk bursts in "Shake It Off" and "You Are My Face" are quelled by Tweedy's lackadaisical lyrics. If Sky Blue Sky is the product of Wilco's newfound clarity and cohesiveness, the album's paralytic ambiguity suggests they're also still in desperate search of a purposeful vision.