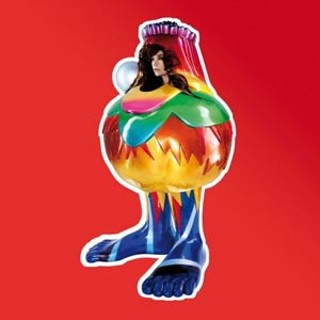 In their careers, these two women often have achieved an eerie psychic twin synchronicity via left brain (Tori Amos) and right brain (Björk). More than a decade after releasing their acclaimed debuts – with so-so albums since the new millennium – they've both arrived at curious political and feminist junctures as wives and mothers. Volta, Björk's sixth full-length, is an ensemble cast with a global pulse. On stomping opener "Earth Intruders," an anti-war "Human Behavior" flashback, she reflects on "turmoil," "carnage," and "necessary voodoo" over a Timbaland-assisted beat and the thumb pianos of Konono No. 1, which quicken the heart rate for much of Volta. "Innocence," another Timba exclusive, grunts over a finger-in-the-socket beat as the star asserts, "Neurosis only attaches itself to fertile ground, where it can flourish." "Declare Independence," featuring Lightning Bolt drummer Brian Chippendale, throbs over a robotic bassline as Björk instructs, "Protect your language!" Beyond the interstellar electro-club vibe, it's still distinctively Björk on the ballads: "The Dull Flame of Desire," a glacial duet in the hands of Antony; "Hope," a tender rumination on a pregnant suicide bomber; and the crystalline "Wanderlust," her elastic caterwaul urging us to "peel off the layers." There are quite a few layers to peel on Tori Amos' American Doll Posse. Arranged around five different personas – Pip, Clyde, Santa, Isabel, and, yes, Tori – her ninth album approaches independence with a different cast. Like Björk, she begins with a political declaration ("Yo George"), though it smirks rather than shouts. On the piano-bar hip-shaker "Big Wheel," she finds power in the term "MILF," and later, on short interlude "Fat Slut," she decides she's sick of that particular slur. "Digital Ghost" could be a lost Journey song; "Teenage Hustling" could be 1970s Heart. There are Wurlitzers, strings, ukuleles. The touches of old Tori ("Girl Disappearing," "Body and Soul") are fairly solid, but most often she gets lost in her mental "posse." At 23 songs, ADP could have benefited from some integration. Both women have gone high concept, but the left and right seem to have switched sides.