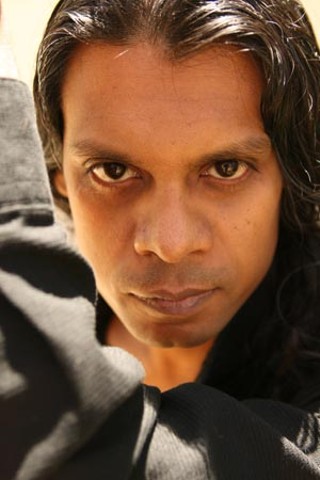 "My dad would rather me sing in a Johnny Cash band," declares Oliver Rajamani.

This doesn't sound odd coming from an Austin musician – unless said multi-instrumentalist was born in rural India. Like all artists, Rajamani fights to follow his muse, yet his struggle crosses history, race, style, religion, and modernity.

Born into a family valuing artistic expression, the now thirtysomething Rajamani was gifted enough to attend the prestigious Kodaikanal International School, a century-old, multicultural American academy nestled in the Indian mountains. Growing up, Rajamani soaked up the devotional folk music of his Tamil tribal culture, also studying Western and Indian classical and contemporary music. He played jazz and rock on the side.

Rajamani then moved to New York City to attend college, painting for art shows as well. He also helped with the International Romani Union, an organization working for the people often derogatorily referred to as "the Gypsies." There he met Dr. Ian Hancock, director of the Romani Archive and Documentation Center at UT-Austin. Through Dr. Hancock, Rajamani learned about Austin, eventually moving to Old Waterloo in 1995.

It didn't take long for the raven-haired Rajamani to make his musical mark here. Within five years, this pearl of the Austin music scene won Best World Music Act at the Austin Music Awards. While world music is a suitable tag for Rajamani's tones, Slackerville fueled his sonic development.

"There's really no place like Austin," states the man with prior Greek and Israeli return addresses. "Austin takes you to a place without borders, with a lot of freedom. I play with all these country guys and we all do our tradition, but we're not trying to hold on to anything."

"I've played with a lot of Indian musicians, and Oliver is one of the best. Oliver was schooled in Indian traditions, but his father encouraged him to learn Western music, too. His dad loved Johnny Cash, so when we got the chance I gave Oliver a bass, and we did 'Ring of Fire'! We filmed it and sent it to his dad."

"Johnny Cash, Jim Reeves," lists Rajamani, laughing at the seeming incongruity of all. "Hank Williams – my dad loved that stuff."

"I play redneck music from India," he declares.

To understand is to appreciate Tamil Nadu, Rajamani's home region in India's deep south, one of the oldest continuously inhabited places on Earth.

"They're kind of like Texans," explains Rajamani, quoting the regional pride: "'We're not part of the country; we're our own state, our own people.'"

And oddly enough, in one of humanity's oldest societies, folks enjoy spaghetti westerns.

"I've always had this dream about living in Texas," begins the full-throated singer. "Especially cowboy culture, very uniquely American. Clint Eastwood movies were huge, like For a Few Dollars More. I watched those all the time with my uncles. America had this exotic thing about it.

"I loved Native American culture, Western culture – there was something really raw about it. It connected me to Indian culture, which is also very raw, redneck-y, direct."

Speaking of reds, there's one in particular who represents a dream collaboration for Rajamani.

"Willie Nelson, because he sings redneck songs which are pretty similar to the South Indian songs I sing."

Nevertheless, Rajamani was about to have an epiphany about cowboy culture vis-ã-vis his own culture. While in New York, Rajamani worked up oil paintings, often with Western motifs. One memorable day, his art instructor asked what his problem was, man.

"'You're from India,'" Rajamani recounts chuckling. "'Do something Indian.'

"All the sudden, everything changed."

He had overlooked his own culture for American culture, but his art instructor's direct question provided a pearl of wisdom, and with it Rajamani looked upon his own history with new eyes.

Rajamani also began working more in music. Through his exploration of Tamil folk songs, the singer/strummer/timekeeper felt drawn to the Romani people.

No one knows exactly why, but Indians migrated west around A.D. 1000, making their way over the centuries to Spain and Ireland, all the while helping develop Eastern European music, flamenco, Django Reinhardt-style jazz, and klezmer. Romani scholar and UT professor Hancock describes Rajamani's Romani affiliation, and his role in Austin's aural oyster.

"Oliver does play our music," says Hancock. "He's supportive in bringing attention to our origins in Northern India through his performance. Oliver is also a fine musician and an asset to the Austin scene."

While not Romani himself, Rajamani's knowledge and proficiency in Romani music would be hard to match. Of course being an Indian playing Romani music in the heart of Texas might cause some folks severe cognitive dissonance, as in "What box am I in?"

This is another pearl of Rajamani wisdom, his ability to draw from stylistic histories while fashioning something new.

"I don't see myself as an Indian playing oud, a Roma going back to India," says Rajamani. "I see myself as someone who can pick up any instrument and learn the basis of the tradition, yet do my own thing. This is the whole tradition of the Roma – leaving India, going into countries, taking the music that was there and interpreting it their own way."

Thus, Austin both contributes to and benefits from Rajamani's quest.

The World Is My Oyster

Once Rajamani felt more comfortable in his native country's shoes, his musical skills grew like bamboo bathing in a Miracle-Gro river. The musical instrument world was his oyster, ripe for the plucking.

Case in point, in the living room of his Eastside Austin home, an Afghani rubab sits next to Rajamani as he speaks. Simultaneously, the bright-eyed musician holds an oud, plucking soft notes as he talks. This isn't affectation, but rather business as usual, the way some folks hold a cat while conversing. One pictures this fellow dreaming in melodies and rhythms.

While proficient with several instruments, Rajamani's ultimately become a veritable one-man orchestra. Likewise he's a singing Rosetta Stone, vocalizing in more than a half dozen languages. As with instrumental music, room for interpretation is a positive thing.

"Since people do not understand the language I sing," acknowledges Rajamani, "they have an easier time letting go of their prejudices and ideologies, to just be moved by the music, to connect to something more real in themselves by not knowing I am singing a Christian, Hindu, or Islamic song."

The Pearl King's 2000 debut, Pakiam, firmly placed his name on the local map. National tours and myriad local gigs, including weekly stints at El Sol y la Luna and frequent Cactus Cafe appearances, cemented his reputation as a compelling live act. Sabas, from 2004, built momentum, yet all was not well in Rajamani-land.

"My family spent their whole generation trying to get away from village life, to be completely modern, Western, and successful," divulges Rajamani, oud against his torso while an emergency siren eerily dopplers in the background. "And here I am completely going backwards. They're always asking, 'What are you doing over there? We put so much money into sending you there and you come back asking about your grandma.'"

"They'll like Jim Reeves love songs, but not Tamil love songs," Rajamani exasperates. "It's such a weird thing. That's what I've been fighting for so long."

In the end, his family's questions sparked Rajamani's self-evaluation, a mental pruning: "Where do I stand in this world?"

The Nine Pearly Gates of Paradise

Formed through irritation, time, and friction, yet gorgeous, imperfect, and universally valued, a pearl is the ideal icon for the evolved soul. Hence, pearls hold high symbolic weight in many religions, particularly with regard to earthly happiness and the afterlife.

The sacred Hindu Vedas speak of the Nine Pearls, while the Quran asserts that one of the greatest treasures in paradise are pearls. Jesus describes the kingdom of heaven as a "pearl of great price," while the gates of heaven are reportedly each made of a single pearl. It's fitting, then, that Rajamani's second epiphany is written in two new spiritual chapters, 40 Days and 40 Nights, to be enacted live May 20 at One World Theatre.

As Rajamani has learned, not being rooted in any one place means you're from everywhere, a true citizen of the world. He describes the transformation.

Three's a charm for Rajamani, releasewise, as this sonic, devotional love letter to his family displays both musical and spiritual growth. It demonstrates a maturity of someone who's struggled – and overcome.

"These CDs are real growth for me ... the letting go of the world, and putting total faith in the spirit. It's come down to that for me. I love the world a lot more when I'm in the spirit."

And it shows. In addition to the highly emotive sounds he's known for, Rajamani also stretches out, covering Dylan's "Forever Young," and giving the Tamil touch to old North American spirituals "This World Is Not My Home" and "Wayfaring Stranger."

Those not familiar with Rajamani's diverse portfolio, or his penchant for experimentation might view such syncretism as novelty. Or they may, like his family, scratch their heads. Yet only musicians with such robust confidence can extend art's boundaries.

"Life constantly flows, it's not afraid to make mistakes. It's not going by any law that we create. It's going by the law of the spirit, and when you connect, you become the music."

In the end, Oliver Rajamani has done his name proud, a pearl diver of the first order. He explains the link.

"The name King of Pearls comes from my last name. 'Raja' means 'king' and 'mani' means 'jewel,' or 'pearl.'

"Plus, my birthstone is pearl."

Oliver Rajamani celebrates Forty Days and Forty Nights at another Austin pearl, the One World Theatre, Sunday, May 20, 6 & 8:30pm, 330-9500. www.oneworldtheatre.org.