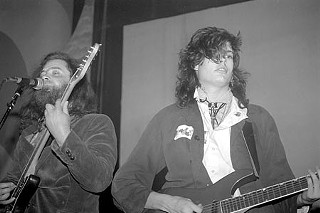 Roky Erickson and Will Sexton, Ritz 1987 (Photo By Martha Grenon)

Puttin' on the Ritz

When the Alamo Drafthouse moves into the Ritz building in August, its Music Mondays will roost in the balcony. "I like that it will be more intimate," says programmer Kier-La Janisse. "It allows you to be a little crazier with the programming when you have half the seats to fill."

Improved lighting and sound will also allow for more live-music tie-ins downstairs, Janisse adds. Though nothing has been signed, or even suggested, one potential tie-in might be Roky Erickson; Palm Pictures releases Kevin McAlester's Erickson documentary, You're Gonna Miss Me, on DVD July 10. It wouldn't be the first time music and movies have coexisted at the Depression-era theatre.

When Armadillo World Headquarters poster artist Jim Franklin and late partner Bill Livengood reopened the dormant Ritz in 1974, Monday nights were as dead then as they are now, so they showed old cowboy movies and booked bands to warm up. "We had Willie Nelson, Asleep at the Wheel," recalls Franklin. "Some stellar talent."

A shot from the Ritz's days as New Atlantis, circa 1978 (Photo By Ken Hoge)

Original owner Elmo Hegman couldn't afford top-shelf names like Gene Autry (who appeared instead at the Paramount), so he booked vaudeville-trained B-stars like Tex Ritter, Gabby Hayes, and Max Terhune, who could toss a playing card from the stage to the balcony. (State law back then mandated separate entrances for white and black patrons, which is why the staircase to the balcony opens to the outside.) Ritter was fond of asking the people in the balcony, "How are y'all doing up there on the shelf?"

Bookings during Franklin's tenure included Bukka White – who told Franklin he played a National steel guitar because, "I tear up a wood guitar" – the Weather Report, and Chuck Mangione.

"It was a great room for sit-down music," Franklin muses.

For his first-ever Austin show, Bo Diddley fronted a pickup band including Jimmie Vaughan, Doyle Bramhall Sr., and Paul Ray. Diddley planned to play about 10 minutes and take a break. "He said, 'I'll wear these guys out,'" recalls Franklin. "I said, 'I don't think you'll wear these guys out, but you're the boss.'

"He was pleasantly surprised."

After about a year, Franklin tired of people only calling to ask about bookings, not his artwork, so he and Livengood decided to close down. Their last show was none other than Townes Van Zandt. "He said, 'This is about the fifth theatre we've closed,'" Franklin laughs. "He was getting all these bum gigs."

It may be the least-known live-music venue in Austin, but the Moose Lodge at 2103 E.M. Franklin Ave. still might look familiar: It was the site of the Dillon Panthers' football banquet on last week's Friday Night Lights, and several members of the fraternal and service organization's chapter No. 1735 appeared as extras. The increased visibility couldn't come at a better time, because the flurry of development around the old Mueller airport is putting the squeeze on the Moose. Although the property is paid for, its steadily increasing value means more taxes, which are draining the chapter's coffers. Instead of selling to hungry developers, they've decided to start a membership drive and enlisted local accordion master Bradley Jaye Williams to book a series of dances. "It's an old Fifties building, but they have a really cool pecan grove with a dance slab and little stage area," says Williams, a Moose member since last year. "Boy Scouts used to camp out there." Williams' latest project, the Fabulous Polkasonics, play the lodge with Brave Combo in July, and next Saturday, he's bringing in the Kings of Sixth Street, a collection of conjunto old-timers – Chencho Flores, Chon Martinez, Johnny Degollado, Williams' Los Pinkys bandmate Isidro Samilpa, and special guest Flaco Jimenez – about whom Williams and Slacker cinematographer Lee Daniel plan to shoot a documentary this summer. Admission to Saturday's dance is $10 or $5 for members; a one-year Moose membership is $30.

The Crack Pipes 2005; Billy Steve is second from left (Photo By Mary Sledd)

Billy Steve Korpi, prolific guitarist for Victims of Leisure, Bloody Tears, and the Crack Pipes, has been diagnosed with acute lymphocytic leukemia and is currently undergoing chemotherapy at Seton Hospital. Korpi, a locksmith by trade, has no health insurance, and his friends have organized a pair of benefit shows at Beerland this weekend: Friday with Brothers & Sisters; Manikin; and Oh, Beast! and Saturday with the Ugly Beats, Alright Tonight, and Nagel. "Apparently [the disease] responds really well to treatment," says Crack Pipes singer/harp-blower Ray Colgan, "so we're guardedly optimistic right now." Korpi is unable to receive visitors or phone calls, but well-wishers can send cards and letters in his name to Seton Medical Center, Room 701, 1201 W. 38th, Austin, TX 78705, or donations through PayPal to leukorpia@hotmail.com. Additionally, people donating blood in Korpi's name at the Blood Center of Central Texas, 4300 N. Lamar, will receive a voucher that can be dropped off at Rio Rita and will help defray the cost of his upcoming transfusions.

• Get this: Camel cigarettes dropped Austin gothabilly quintet Mr. Lewis & the Funeral 5 from their friends Lomita's Camel-sponsored CD release show April 27 at Beauty Bar because they don't want their smokes to be associated with the word "funeral." "That they automatically connect the word 'funeral' with their product I thought was kind of funny," says frontman Greg Lewis. Although the 5 are on hiatus while they look for a new bass player, Lewis promises plenty of shows surrounding the release of next month's LP, Murder & the Art of the Dance. 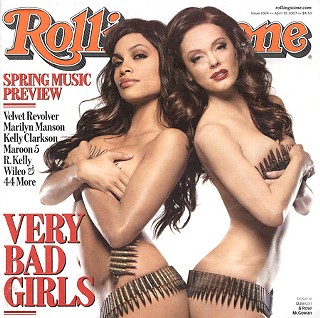 • Rolling Stone senior writer David Fricke's South by Southwest report appears in the current issue with Rosario Dawson and Rose McGowan on the cover. The only local band Fricke singles out this year is Amplified Heat, who he says "de-stroyed a smaller crowd than they deserved with a boogie-war vengeance." The trio's re-release party for 2003 EP Amplified Heat is Friday at Headhunters, and label Arclight Records says their next LP will be out in September.

• Monday, the Texas Commission on the Arts announced the next two official Texas State Musicians, ambassadors charged with promoting arts education in schools and cultural exchanges with other states. Dale Watson will hold the position through 2007, with Shelley King taking over in 2008. The Texas Legislature will recognize all the official artists, including Hill Country singer-songwriter and 2007 Poet Laureate Steven Fromholz, with a joint resolution next Thursday.

• Congrats to TCB mate and Texas' No. 1 Pulp fan William Saunders and lovely bride-to-be Dawn Baker, who tie the proverbial knot Saturday in Surfside. As such, TCB is taking some time off to bask in their reflected matrimonial bliss and will return April 26.