Even though it's over (mercifully), South by Southwest can't stay out of the news. Last week, South Congress clothing boutique FactoryPeople owners Le and Thomas Popov sent several local media outlets an open letter to SXSW organizers and the city of Austin (published on Austinist and Austin360.com) criticizing SXSW officials for giving the Austin Fire Department a list of nonsanctioned parties and events.

One such gathering was FactoryPeople's March 15 after-hours party, shut down by an AFD inspector less than an hour after it started. At issue was the store's failure to secure a temporary change-of-use permit, which allows businesses that don't normally host public assemblies to do so. Le Popov says they were unaware they needed such a permit, and no one from AFD, the Austin Police Department, or any other city agency informed them they did.

"We thought we were covering our bases by having police officers on the door and talking with them about what we needed to run the party efficiently," she says. "We didn't know we needed to contact every single agency, or we would have."

SXSW did give AFD the list in question, says managing director Roland Swenson, but only in the interest of public safety and fair play. "We said, 'If you're going to enforce codes on our events, you need to cover the events that aren't ours, too,'" he says, noting the same list was also published in the Austin American-Statesman and several blogs.

According to Smith, fire marshals shut down four parties during SXSW, at FactoryPeople, Blue Genie Theatre, Penn Field, and an unnamed Sixth Street location. Most venues, official and otherwise, were already in compliance, but, he says,"if they don't already have a certificate of occupancy as a [place of] public assembly, then we need to go check it out."

Smith says AFD issued nine citations during SXSW: five for overcrowding, three for no public-assembly permit, and one for no occupant load card. Although no SXSW venues were cited or shut down this year, he adds, in years past AFD has done both. "They have definitely addressed it," Smith says. "Every year I think they get better about making sure they're legal."

Gerry Van King, the busker known to locals and tourists alike as the King of Sixth Street, hung up his bass March 17. For the past several years, Van King was a fixture in front of Jazz restaurant, which closed the same weekend and will reopen this summer under new ownership as Roux. "Everything must come to an end," Van King says. "When they closed, I closed." Van King, 53, began playing on Sixth Street in 1988, entertaining everyone from former Gov. Ann Richards to members of the Dallas Cowboys and Houston Rockets. He won't divulge how much he took in on a good night, saying, "I didn't make no money; those are blessings." Van King had numerous run-ins with the police over the years and was arrested for playing outdoors without a permit in February 2003, charges that were later dismissed. "By the time they arrested me, I didn't need a permit, because I was on private property," he explains. Van King, featured in the documentary The Last Days of the San Jose and the Austin City Limits opening montage 2001-2006, says he plans to continue performing, albeit indoors, and work on his King's Castle record label. He might even test the waters in Las Vegas.

"I did it before, but I was nobody then," he says. "I'm somebody now." Meanwhile, manager Chad Stevenson says the volume of shows at the upstairs club the Parish should increase exponentially. "Now that I'm not bogged down with restaurant stuff, I can put 100 percent of my time into booking shows," he says. Charles Attal Presents, PMC Productions, and Daughter Entertainment will all continue producing shows at the Parish, he adds. "If the new owners see a week where there's not four or five shows, they start freaking out," Stevenson says. 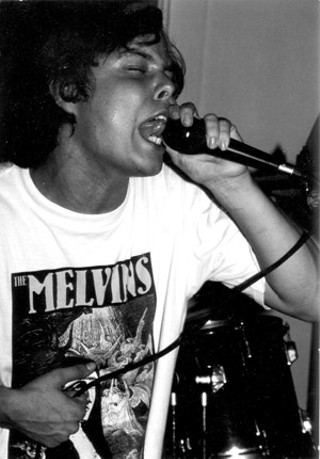 Damon O'Banion, singer for several Austin and Houston hard-rock bands including Dixie Waste, Drunken Thunder, and the High Divers, died last Friday night of a suspected drug overdose. He was 35. O'Banion was born in Houston and attended Lamar High School and the University of Houston. He wrote for the popular underground publication Thora-Zine, once setting up an interview between James Brown and Helios Creed, and also contributed to Public News, the Houston Press, and Whoopsy! "Damon was captivating, one of those performers you wish you were," says friend Renee Montgomery, who shared a rehearsal space with Dixie Waste in Houston. "He was electrifying, energetic, and engaging, always forcing the audience to watch and listen." O'Banion also worked in Whole Foods' regional marketing department for several years and is remembered by friends as being kind, generous, and supportive almost to a fault. "He and his amazing wife, Leslie, were some of the very few to visit me in the hospital often," says former Emo's bartender Chris Tominaga, who was paralyzed in an October 2005 car accident. "They even brought me food from Whole Foods." Besides his wife, O'Banion is survived by his parents, brother, godson Thoren, and ward Raven Rance-Riley, for whom his family has set up a college fund through Wells Fargo. Call 512/344-8653 for donation information.

Hot rods from across the nation have already begun descending on South Congress for this weekend's Lonestar Rod & Kustom Round Up, and several of the musicians playing (see www.lonestarroundup.com for a full schedule) have their own souped-up tales to tell. Jesse Dayton, who fell in love with hot rods watching ZZ Top videos, pilots a 1950 Ford two-door sedan. "It's lowered and Frenched, which means the taillights have been redone," says Dayton, who plays 12:30am Saturday at Trophy's. "It's also shaved, which means there's no handles or gas tank on it." Rockabilly cats the Jungle Rockers play 6pm Friday at Jo's Hot Coffee, and singer Jason Leonard gets to gigs in a 1962 Cadillac convertible. "The trunk holds two full-size amps, and I can fit the whole band's equipment or nine passengers," he says. "It's a great car to have when you're in a group." And Southern Culture on the Skids singer/guitarist Rick Miller, whose Carolina roots-rockers headline the Continental Club through Saturday, drives a 1969 El Camino. "It's got a 350 in it, but I've gotta say, it's not a real hot rod," he says. "I take my garbage to the dump in it." However, Miller's relatives back in Michigan regularly compete in tractor pulls. "It's so cold up there they just sit in their garage all winter long and dream up shit they can do with the engine," he says. This weekend's rainy forecast caused organizers to move Saturday's main car show from Festival Beach to the Travis Co. Expo Center.

• Merge Records announced Monday Spoon's follow-up to 2005's Gimme Fiction will be out July 10; songs on the quartet's sixth album, Ga Ga Ga Ga Ga, include the gramatically challenged "You Got Yr Cherry Bomb" and "Rhthm and Soul." Spoon plays this summer's Bonnaroo and Sasquatch festivals before undertaking a full U.S. tour this fall.

• Fort Worth free-jazz icon Ornette Coleman will receive the Lifetime Achievement Award in music at the 2007 Texas Medal of Arts Awards ceremony Tuesday at the Paramount Theatre. Other honorees include former CBS News anchor Walter Cronkite, author Sandra Brown, and sculptor Jesús Moroles. Del Castillo, the Alvin Ailey American Dance Theater, and the cast of Asleep at the Wheel's Ride With Bob musical will perform. 8pm, e-mail tmaa@txculturaltrust.org for tickets.

• Waterloo Records begins its 25th-anniversary celebration with a storewide sale today (Thursday) and ends it with a huge free parking-lot concert April 15 featuring Joe Ely, Grupo Fantasma, Brothers & Sisters, Omar & the Howlers, Zykos, and the True Believers at next weekend's employee party. Much more next week.