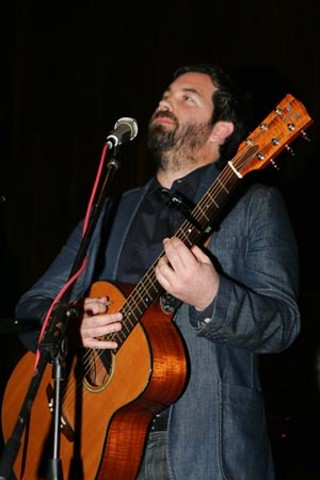 What do you do when you're expecting an enormous, juicy steak, one you've been looking forward to all day, and instead you're given just a bite? Bitter disappointment takes the place of gleeful anticipation, and you leave hungrier than you came. Such was the case at the close of Duncan Sheik's Friday-night showcase, which started 20 minutes late due to extended sound-checking (the motif of this year's festival, it seems). After three lovely songs, all from Sheik's latest LP, White Limousine, he handed over the reins to protege Chris Garneau, whose debut, Music for Tourists (Absolutely Kosher), was produced by Sheik. Garneau is a meek little mouse of a boy, and his voice is a Fabergé egg, delicate and vulnerable and lovely. After Garneau's song, Sheik rejoined the band and the two dueted on "Touch Me," from Spring Awakening, the Broadway musical for which Sheik penned the book. And then it was over, the bounteous buffet of talent yanked out from under the audience's collective nose. If we hadn't been in church, there would have been a riot.