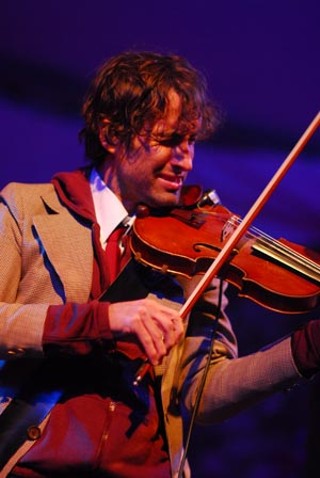 Revealing the mystery behind the production of his latest golden egg, Andrew Bird gracefully flew through the majority of Armchair Apocrypha, his seventh LP and first for Fat Possum, which finally hatches next Tuesday. The Chicago-based troubadour, backed for the occasion on drums and keys by longtime collaborator Martin Dosh, and bassist Jeremy Ylvisaker, looked comfortable and confident with the new tunes. His quivering, Roy Orbison-like croon floated like a feather atop his guitar lines, beginning with album opener "Fiery Crash," and his whistling perfectly accentuated the xylophone movements. The segueing of "Imitosis," "Plasticities," and "Heretics" proved a grandiose trifecta, while the live sequencing in "Scythian Empires" created a beautiful, multilayered canvas of plucked, strummed, and bowed violin. The former Squirrel Nut Zipper swingman dipped into his Bowl of Fire only once for "A Nervous Tic Motion of the Head to the Left," the audience bobbing their heads in unison, before the set climaxed with the new album's strongest suite, "Darkmatter." Look out, this Bird's got wings.