With Austin's ever-expanding skyline as its backdrop, Public Enemy's Auditorium Shores performance garnered a groundswell of appreciation from a town quickly losing touch with its renowned liberalism. Whereas conservative pundits used to cream their pants over labeling Public Enemy a divisive influence, Chuck D and company made it clear as day on an open, city-managed stage that there are no barriers between psyches oppressed by a common evil. Along with Flavor Flav, Professor Griff, DJ Lord, and a full funk-rock band, Chuck worked his bullhorn delivery into its classic state of relentless revolutionary fervor. By way of "Welcome to the Terrordome," "Black Steel in the Hour of Chaos," and "Shut 'Em Down," Public Enemy stood tall with about as much projected disdain for Bush, Cheney, Rice, and their sordid war as could ever be produced from such a corporate-sponsored event. If only Ann Richards were still here to witness what would have certainly never been allowed to happen so many years ago when she and Public Enemy were simultaneously at the peaks of their careers. 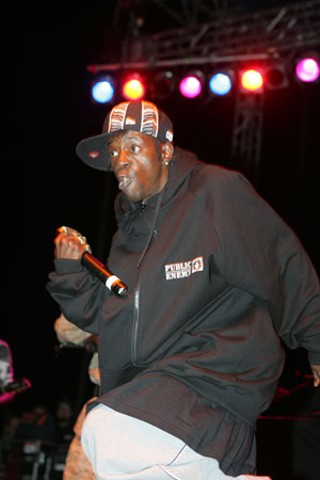