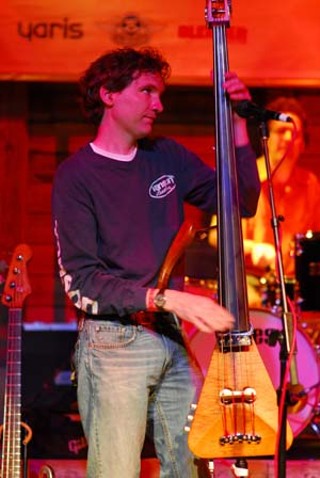 Anyone who recognizes his name was probably introduced to Viktor Krauss in the early-Nineties when he played stand-up bass with his sister, Alison, or perhaps as a member of Lyle Lovett's Large Band. If you were expecting bluegrass, nugrass, or country from Krauss on his own, however, you were in for a shock. Fronting a quartet composed of Jack Silverman and Steve Walsh on guitars and Scott Amendola on drums, Krauss showcased a set of jazz that ranged from subdued soundtrack fare to near metal. While he never took a solo, the dark-haired bassist appeared more than satisfied with a stagewide smile on his face throughout. Unfortunately, although competently played, Krauss' music never went anyplace special. Echoing the sounds of guitarists like Bill Frisell and Jeff Beck appeared easy enough for the group, they just didn't bring a singular touch to any of it. Back Porch Records' labelmate Mutlu added understated, soulish vocals on "(I Could Have Been Your) Best Friend" near set's end, but that too didn't stand apart, and it appeared that was just the way that Krauss wanted it.