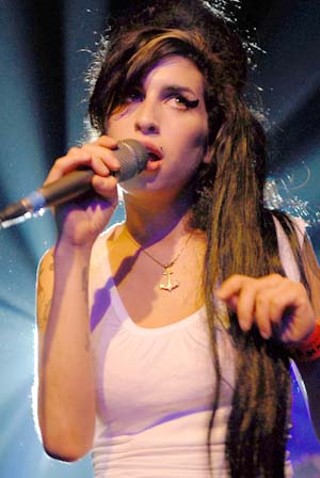 Long live Nina Simone. North Londoner Amy Winehouse has the look down pat. She's got the band and the groove and the lungs of steel. The only thing she's missing is that raw Nina growl. Strutting onstage to the Chiffons' mood-setter "He's So Fine" with hair up to there, Winehouse and her band, the Dap-Kings, slurred through her two LPs, 2003's Frank and the new Back to Black. "I wrote my whole album about being heartbroken," the temptress admitted. "I'm singing some really sad and fucked-up things." Songs about leaving and loving and not being able to pick yourself up off the floor coalesced in "I'm No Good," and as if Winehouse poured some inner strength into her ubiquitous whiskey and coke, the show hit its groove with "Me & Mr. Jones," or at least her non-radio-friendly edit. There's a thin line that separates talented pop and R&B stars from the jazz masters, and while Winehouse may wobble slightly across it, she comes closer to the Holidays and Fitzgeralds of yesteryear than any of her contemporaries could ever hope. Her live glossiness lacked the rough edges of the greats, but when she let loose, the lights rattled. "I'm drunk," she laughed before launching into "Rehab," which finally gained the crowd's full approval. The irony with hearing her sing the line "I don't never want to drink again" as she takes another gulp is apparent, but her covering the Zutons' 2006 "Valerie" to close wasn't at all. Winehouse is full of surprises, but her sometimes-abrasive candor might be just the shot in the arm that the States need.