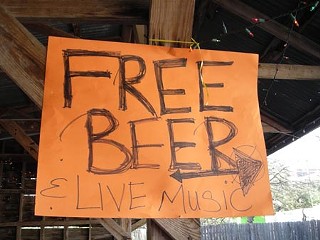 Photo By Melanie Haupt
Walk into an Austin bar and ask for the girliest drink in the house and you might be surprised with what the bartender hands over:

"I'ma gonna make the Fourth of July with mah cock-hole!" – David Cross, on having to "shoot off" to the Chunklet party at Red 7.

While the husband and I enjoyed an early lunch at Enoteca Vespaio this morning, we were reminded – rather loudly – of the tension that exists among the camps of SXSW. An exec enjoying Prosecco and antipasti with a pal stated that he wants to "work on developing [his] eye" in order to spot raw talent. "If I was really good at that, I'd make a lot of money." Definitely an eye-opening glimpse into how the "other side" approaches SXSW when so many of us are in it for the music (and the free beer and barbecue). Food for thought on this particular day, the 30th anniversary of The Great Rock 'n' Roll Swindle, wherein the Sex Pistols were fired from A&M Records due to their questionable behavior. The band made £75,000 from sales of "God Save the Queen" after six days on the label. 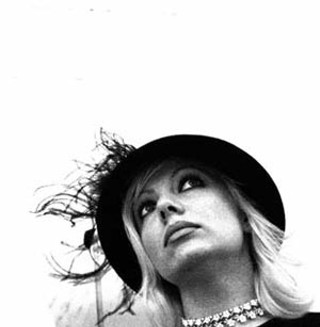 Kelly Crisp of the Rosebuds

WHERE THE BOYS AREN'T

We headed to Pok-e-Jo's to catch +/- and the elusive (for us) Rosebuds at the Merge Records party. This is a historically well-attended party, so it was surprising to get there and find ample parking and plenty of room to stretch our legs in front of the stage. Media maven Christina Rentz, kitted out in an adorable green-and-white floral top and pink tennis socks with green puffballs on back, chalked it up to all the other hot parties happening at the same time. I was just glad to finally get to enjoy some music. Stick a fork in me, I'm done.

My big plan for the day was to check out the Comedy on the Music Circuit panel at the Convention Center, then head over to the Chunklet-sponsored Mess With Texas party at Red 7. The panel, moderated by Bob Mehr of Memphis' The Commercial Appeal, was mildly interesting, as the panelists debated the relative merits of embracing punk and zine culture techniques of gaining an audience. Apparently, indie-rock fans are humorless boobs with no sense of humor, but comedy club audiences suck, too. More interesting was panelist Zach Galifianakis' fidgeting, digging through his backpack, rolling his eyes, rubbing his face, and looking generally bored and annoyed. No one could have wanted to be there less than this guy did, although he did occasionally bring the funny and brighten up an otherwise dull and poorly attended discussion.

The line at Red 7 for Mess With Texas nearly wrapped around the corner when I arrived, and if there's one thing I don't have time for, it's standing in a line that's not moving. So, I punted and went to Mohawk for the Hot Freaks party, in hopes of seeing Apostle of Hustle. A line and a $3 cover! Screw that! Bop over to Emo's for the Pitchfork party – aaaaaaand there's a line at both entrances. Curses! I finally got some love at the Habana Calle 6 Annex, which housed the Yep Roc 10th anniversary party. There we saw John Doe as well as a purple-clad Robyn Hitchcock, who busted out with an old Soft Boys tune and dedicated his final number to Karl Rove. The day parties have now officially reached critical mass and are just as hard to get into as showcases.

YOU DON'T HAVE TO GO HOME, BUT YOU CAN'T STAY HERE 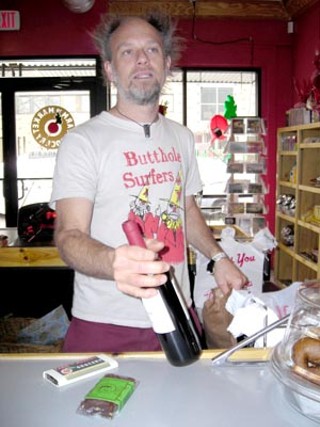 Photo By Melanie Haupt
Hey, SXSWesters, we love ya, but it's time for you to fly. Before you go, be sure to pick up some locally produced souvenirs to take home to the family. Here's a list of Farm to Market Grocery (www.fm1718.com) staffer Lance Bradley's favorite Austin goods: