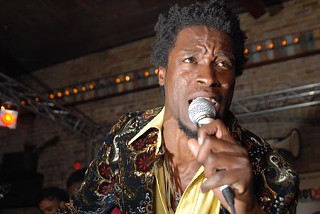 Highlighting some of Brooklyn's best experimental talents, the bands on Gigantic's showcase fit the bill by refusing to fit anywhere else. Case in point, newcomers O'Death and Dragons of Zynth. O'Death kicked things off quite literally with drummer David Rogers-Berry breaking his foot pedal amidst the fury while his other boot kept pace with a taped-on tambourine. Led by Greg Jamie, looking like an even more grizzled and menacing Will Oldham, the group's ruckus displays what happens when rednecks find punk rock, which, it turns out, sounds somewhat akin to Tom Waits giving birth at the county fair. And like a hometown carnival, O'Death is dirty, absurd, and absolutely enthralling. Dragons of Zynth, meanwhile, got lost in the funhouse themselves, tripping through angular rhythms and heavy fuzz held together by throbbing basslines, a sound that builds heavier layers onto TV on the Radio-styled beats and harmonies. Frenetic, flamboyant, and rocking, the group's Afro-tech grooves draw from dub, soul, funk, and punk and ensures Coronation Theives to be one of the hottest debuts this summer.