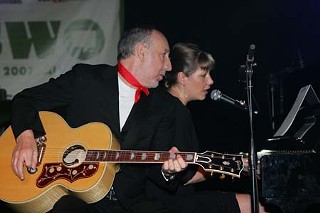 If you didn't know that Rachel Fuller was Pete Townshend's main squeeze, you should've gone to South Padre for your spring break. And "Special Guest" he was. In fact, when the showcase's scheduled opener was running late, Townshend stepped onstage and proclaimed, "I'll close it. I'll open it. And in the middle, I'll ruin it for everyone." So Pete's batting .667. (Sorry, didn't want to quote Meatloaf). He did indeed open it with "Drowned" from Quadrophenia. And close it he did with a too-brief, two-song set. In between, Townshend had little to do with how totally lame the intervening "Attic Jam" showcase was. When Martha Wainwright is the manliest other special guest on your bill, you have a lineup that's totally too sensitive. Townshend joined other guests Willy Mason and Alexi Murdoch as they cycled through their own material and the odd cover ("Everybody's Talking") or Townshend composition ("Let My Love Open the Door"). It wasn't that there wasn't enough of the main attraction; it's just that everything else was, well, boring.