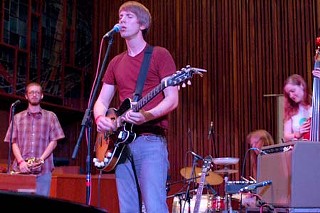 Consider Shearwater's otherworldly showcase a testament to the Austin act's decision to re-record and release a deluxe edition of last year's Palo Santo. Where that album failed to capture the frailty of songsmith Jonathan Meiburg's restrained falsetto and magnitude of his cataclysmic outbursts, at the altar of Central Presbyterian Church the local quintet delivered a baptism by fire that revealed the full extent of the band's matured songcraft. Beginning behind the grand house piano, Meiburg's voice resonated beautifully throughout the steeple with Santo's slow-building opener, "La Dame et la Licorne," before a rapturous kick drum ushered in the banjo-tinged "Red Sea, Black Sea." The recent Matador signees debuted some new material as well, most notably a pensive piano ballad, "The Snow Leopard," that segued into a rousing "Seventy-Four, Seventy-Five." Fulfilling a childhood fantasy, Meiburg, a former Episcopalian choirboy, then amped up his electric guitar and rattled the pews with "Nobody" and "White Waves," closing with the crashing crescendo of "Hail, Mary" that quite possibly pierced the heavens.