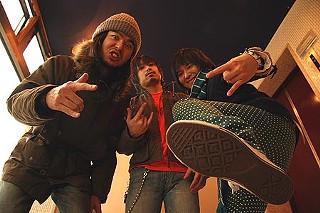 Guitarist Dead K from Tokyo's Green Milk From the Planet Orange proudly calls his trio a progressive-rock band, but anyone expecting to hear Tales From Topographic Oceans is in for quite a shock. The hifalutin bloat once synonymous with prog is gone in favor of the adventurous spirit found in King Crimson, Soft Machine, and Can. GMFTPO stabs its chosen genre in the heart with a needle full of frenzy. Dead K and drummer A (he and bassist T are known by their initials) served time in Tokyo's grindcore scene before starting GMFTPO in 2001.

"I was already a prog-rock fan," says K. "I really wanted to add some factors from progressive rock on my former band's music, but I couldn't do it well, and the band was not tight to play that kind of music. But in this band, everybody was okay to play progressive rock!"

"It's very nice to do a tour here," observes K. "Gas is cheaper, roads are cheaper, and the clubs and people care about the bands."