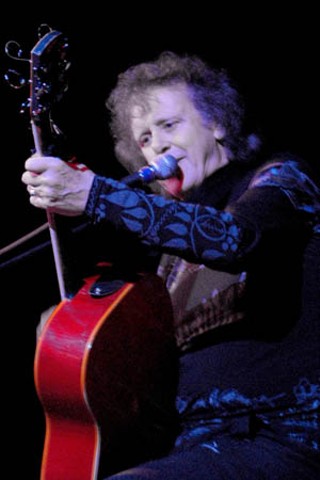 Given the preponderance of canes and crutches, one could have misconstrued that folks entering Central Presbyterian Church did so for a healing ceremony. If so, nostalgia was the salve. Like Brazilian soccer stars and Indonesian commoners, the Glasgow, Scotland-born Donovan Phillips Leitch is known by his first name. Admiring the hallowed confines, the 60-year-old Celtic troubadour followed his unnamed opener with, "It's good to start off with a pagan song." Following with "Yellow Is Color" and "Sunshine Superman," Donovan held the attention of the packed worship house through 10 songs in 40 minutes, including the forthcoming "Gentle Heart." Naturally the crowd craved classics, and Donovan and his heavily-inlaid green-and-red acoustic didn't disappoint, pulling from his Sears & Roebuck-sized catalog, including "Hurdy Gurdy Man," "Season of the Witch," and "Mellow Yellow." In truth, the crowd's median age was lower than expected, with plenty of kids younger than Donovan's. One thirtysomething was heard to opine from the pew behind: "If there's a chance to see Donovan, I'm not going to miss it. He's a classic!"