SXSW Music News and Carryings On 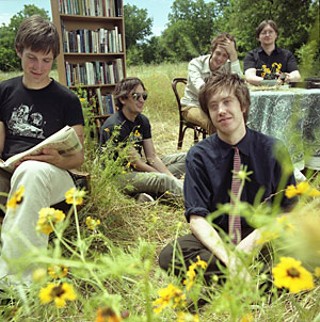 Okkervil River (Photo By Mary Sledd)
The Stooges have been very selective in adding SXSW appearances besides Saturday night's Stubb's show, but they will play around 1pm Friday at the Austin City Limits studio on the UT campus, SXSW home away from home for Seattle's KEXP. The next band up (see Kexp.org for a full schedule and to listen in) is Austin's very own indie-folk working-class heroes Okkervil River. Tuesday night at Beerland, as Grand Champeen rocked the house with tunes from their new Dial 'T' for This, Okkervil drummer Travis Nelsen was nonchalant about following Iggy and company. "It's the last show we play at SXSW, Friday, 3:30pm," he said. "Then it's time for double gin and tonics and double helpings of barbecue." See how they're doing with that 12:45 tonight on the Mohawk patio.

It took about an hour Wednesday for SXSW's first big-name rumor to surface, that boozy Brit chanteuse Amy Winehouse had backed out. Not so, says SXSW Creative Director Brent Grulke. Her show tonight at La Zona Rosa is a go, and "keep an eye out, you might see her twice." For reasons known only to her, Winehouse did cancel all promotional-type appearances, which her record company probably loved. Not so lucky were Mexico City duo Rodrigo y Gabriela, whose fortunes shot skyward after a recent Letterman appearance, but couldn't manage a SXSW encore due to male half Rodrigo Sánchez reportedly showing up on a homeland security watch list. It was someone else with the same name.

The Attack Comes Back 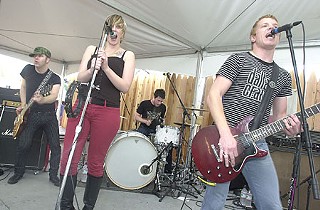 Photo By John Anderson
Welcome back Young Heart Attack. The Austin hard rockers played their first show since November 2005 Wednesday at the Scoot Inn's Turbojugend Texas party, the one with all the weirdness over the TABC license (see above). Guitarist Chris "Frenchie" Smith was feeling re-energized. "Every band has to find new reasons to create together and want to be around each other," he says. What happened, in a nutshell, was "band starts tour with label, comes out without label. We eventually got back into a little bit of normal life, but too much of that can make bands forget what they are." A new album, Smith adds, is "dangerously" close to completion.

Sunburned Hand of the Man 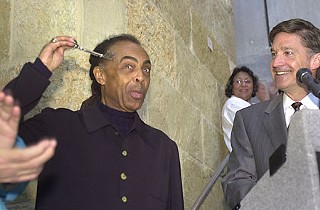 Mayor Will Wynn (r) presents Gilberto Gil with the key to the city. (Photo By John Anderson)
SXSW 2007 wasted no time in reigniting issues between nightclubs and various regulatory bodies that never truly go away. The Scoot Inn's beer/wine license got yanked literally midsong at the Turbojugend Texas party. It still belonged to the previous owner, who called the TABC Wednesday and canceled. About 4pm, agents showed up and told the bar to shut down, and manager Joe Sebastian and staff were still trying to figure out a solution at press time. Meanwhile one Red River club, which shall remain nameless for the moment, is only open this week at all due to the last-minute intercession of Austin Mayor Will Wynn. They're still stuck with a fire marshal on site at all times to the tune of $120 an hour, which the owner reckons will run the club $6,000-7,000 through Saturday. After rocking out to the "She's So Heavy" stylings of New York's Earl Greyhound at the Austinist/Gothamist/Gorilla vs. Bear "Gonna Gonna Get, Get Down" blowout, Wynn noted Austin is the largest U.S. city without a major-league pro sports team, telling the packed Mohawk "live music should be our sports franchise. Instead of a family dropping $400 on an NFL game, spend $35, $45 on live music four or five times a month." Earlier, Wynn presented Brazilian jazz icon, now his nation's official culture minister, Gilberto Gil, with the proverbial key to the city. A complete samba troupe – from where else, Austin Samba School – and capoeira dancers in the middle of City Hall on Wednesday morning means it must be SXSW, making TCB grateful for still another Brazilian specialty, coffee.

TCB loves polling friends for their SXSW to-do lists, chiefly because they've actually had time to map them out. KUT's Laurie Gallardo, hostess with the mostest at the Mohawk Wednesday, says about our locals, "I always try to hunt down the IV Thieves. Hello Stranger is really great. Peter & the Wolf. Lovely Sparrows are sounding pretty damn fantastic," finishes Gallardo, who fills in on Left of the Dial 9pm Friday on 90.5FM. Local events/booking agency Green Potato Ventures owner Rosa Madriz is enamored of Cold War Kids, Architecture in Helsinki, Austin's the Laughing and Loxsly, and the 7pm-4am Four on the Floor house party Saturday night at 15th and San Antonio that "has a good mixture of everything I'm curious to see." HoustonSoReal.com don and SXSW consultant Matt Sonzala weighed in with Norwegians El Axel, H-town homeboys UGK and Devin the Dude, and even showed love for the Dallas night Friday at Visions with Money Waters: "There's a lot of shit going on in Dallas right now."