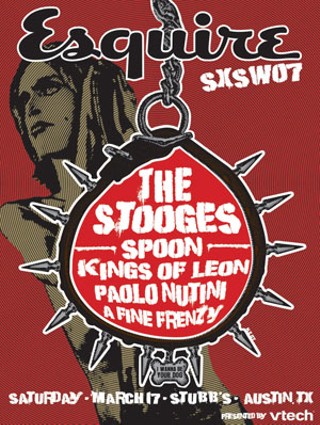 Because that ever-burgeoning behemoth of a music festival known as South by Southwest happens here, the thousands of visitors who partake every March assume Austinites understand it. They couldn't be more wrong, starting at the very top.

"As if we really had any say in the matter," says SXSW managing director Roland Swenson on whether organizers are satisfied with the Festival's current size. "South by Southwest is what it is, and we do our best to stay out of its way."

Easier said than done. SXSW enters its third decade as not only one of the most important music/business gatherings in the world but also the centerpiece of the nation's post-Oscars cultural calendar. Nowadays, media outlets such as MTV News, XM Satellite Radio, the BBC, E! Entertainment Television, and DirecTV (debuting continuous live coverage this year) cover SXSW as thoroughly as CBS and ESPN do that other March Madness. Tastemaking radio stations like Santa Monica's KCRW and Seattle's KEXP go live from the Festival all week, and you can't swing a dead armadillo in Austin this week without hitting a blogger. "Sorry we're writing so much about SXSW, but you should probably get used to it," Stereogum, arguably the blogosphere's most influential music-related Web site, advised its readers Feb. 21.

This year, the river of hype fed by Stereogum and similarly minded sites – Pitchfork, Brooklyn Vegan, Gorilla vs. Bear, Done Waiting, Austin's own Austinist – came with a twist. The logistics of shoehorning more than 1,300 performers into 59 venues, a new record on both counts, caused SXSW officials to delay announcing their 2007 roster for several weeks past when they had done so in previous years. Not surprisingly, on message boards and comment threads across the Internet, the Festival took a beating.

"Nobody really knew why it wasn't being announced," offers Austinist Editor Allen Y. Chen. "If you don't provide the information, you're going to leave it up to bloggers and random people on message boards to speculate. I don't think that's ever a good idea."

A bigger online eruption came last month after SXSW Music creative director Brent Grulke told TCB that SXSW "is not a consumer event." Chen, who estimates 65% of the past month's Austinist content has been SXSW-related, says at least as many people have posted in favor of SXSW as against.

"I think the majority actually skews in favor of it," he reckons. "But when you have a negative comment, it resonates with people because it's jarring."

As they have for years, grumbles persist that SXSW has forsaken its roots as a forum for undiscovered talent in favor of higher-profile, and better-bankrolled, performers. "The main problem is that it is filled with bands we've already heard of, who already have fat record contracts, and the lesser-knowns and local groups who really deserve attention are given short shrift," Dallas Observer Music Editor Jonanna Widner (sister of Chronicle Managing Editor Cindy Widner) wrote in a Feb. 15 article.

"We've been hearing that comment from day one," counters Grulke. "And it isn't any more true now than it ever was. In fact, given the current state of the music business – one where the majors have much less money to promote acts with – it's probably less true." Only 16% of SXSW 07 performers are signed to majors, Grulke notes, many to the labels' smaller international arms.

"That percentage has stayed about the same ever since South by Southwest began," he adds.

There are more major label acts, of course, because there's more of everything. SXSW is such a runaway train at this point that organizers realize they might not even be able to change it if they wanted to. Placing an arbitrary cap on the number of performers accepted, Swenson says, would lead to uncomfortable questions like, "How would we decide who gets to go and who doesn't? And what would stop people from coming here anyway and doing their own events? That's already happening."

The continuing proliferation of pirate showcases and free day parties has bedeviled SXSW for years but not as much as people might think. This particular horse has long since left the barn, admits Swenson.

"Most of them are complementary to what we do," he says. "The ones we take issue with are the ones that tell the talent they can only play their party, the ones that say, 'South by Southwest sucks, and we're cool, so you should play our thing.'"

Even something as seemingly simple as adding another day or two to the Music Festival isn't nearly that cut-and-dried.

"Frankly, I don't know how easy it would be to get the clubs to let go of another day," admits Swenson. "When we first started Wednesday shows, a lot of the clubs we'd been working with for 10 years said, 'Why would we want to do that?'"

Why? Because music matters to people and in few places moreso than Austin. If nothing else, the lively debate surrounding the Festival this year proves that beyond any doubt. For 21 years now, that's about all anybody has really known for sure.

"We spend all year working up to this precipice, and we're about to jump off," says Swenson.

So are we all.

Illustration By Nathan Jensen
On the Chinese calendar, SXSW, born March 1987, is a Fire Rabbit. According to www.chinese.astrology.com, those born under the element of fire, which also governs our current year of the Pig, burn through life with "fierce charm, impulsive enthusiasm, and restless emotions." Rabbits are "extremely popular and have a wide circle of family and friends." This year "could be a good year if you are in business," and as for relationships, "passion runs deep; there is a strong chance of finding a new love." Proceed with caution, though: "With all the Fire around, you could be susceptible to minor accidents if you try to keep up with the hectic pace." Sound like anyone, or anything, you know?
More TCB columns