Tweet
print
write a letter
All Showcases Subject to Change 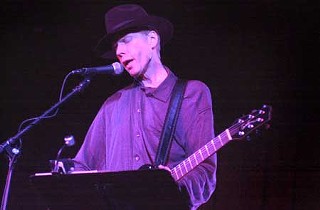 7pm, Central Presbyterian Church Anyone who was there that night remembers the sight: Jandek walking – no, floating – onstage, dressed in black and dark blue, light as a feather while we all sat stiff as boards. He managed to completely silence the crowd at the Scottish Rite Theatre that sweaty summer night in 2005. It was like we were all afraid he would break if we clapped too hard. Whether you are fascinated by him or think his music is about as compelling as watching grass grow, the fact remains that the elusive, reclusive Houston musician has played out more in the past two years than any time in his staggering, unusually efficient 30-year recording career, and to full houses. For his SXSW debut, he plays with the likes of Bill Callahan and Gary Lucas. Added bonus: This is the only time you'll ever see Jandek and Tom Morello on the same stage. – Audra Schroeder

6pm, Town Lake Stage @ Auditorium Shores/11:45pm, Emo's Main Last year Rolling Stone tapped the Riverboat Gamblers as one of five SXSW breakouts, and here they are on its biggest stage. Makes sense: The Denton/Austin punk fiends released To the Confusion of Our Enemies and toured like rabid Vikings before and since. Oh, and Spin named them the 15th-best live band in the world. – Christopher Gray

8pm, Town Lake Stage @ Auditorium Shores The metal mongrels in Mastodon conquered the raging sea with the oar-cracking riffs of their Moby Dick-inspired Leviathan in 2004. The Atlanta-based quartet then inked a deal with Warner Bros. and crafted its own epic quest – past a "Circle of Cysquatch" and a "Colony of Birchmen" – to ascend Blood Mountain last year. – Austin Powell

8pm, Emo's Main Room These Manchester-born Londoners link '67 to '77 to '07 in a way no other late-Seventies pogo machine can touch. Pete Shelley and Steve Diggle still know how to riff your heartache to death, with new album Flat-Pack Philosophy dialing down "Orgasm Addict" into "Reconciliation" mode. – Darcie Stevens

8pm, Elysium In stark contrast to the brash rap of her brother, Black Nasty, the prosaic poetry and rustic indie rock of 24-year-old local singer-songwriter Pink Nasty (Sara Beck) blossomed on her self-released sophomore set, Mold the Gold, with help from Will Oldham. Often backed live by Austin's the Black, she's decidedly not Nashville. – Austin Powell

8pm, Spiros After 12 years as lead vocalist, keyboardist, and songwriter for the legendary ska-punk band Tijuana NO and now singing backup for Julieta Venegas, Bastida breezes into a well-earned solo career with hearty, skirt-flipping gusto. Her confident vocals combined with shrewd songwriting skills highlight a knack for the unusual. – Belinda Acosta

8pm, Antone's Best known for the Seventies soul-funk classic "Express Yourself," Charles Wright & the Watts 103rd Street Rhythm Band re-emerge in support of 2006's Finally Got It Wright. With band members spilling over into outfits including Dyke & the Blazers and Earth, Wind & Fire, the Watts 103rd rekindles Wright's founding vision of liberation through music. – Robert Gabriel

9pm, Emo's Annex Devastating energy radiates from the voice box of Sharon Jones when the soul revivalist works herself into a cold sweat on stage. The Dap-Kings replicate late-Sixties 45 funk perfection to a T, and Ms. Jones springboards from its lofty perch straight into a sea of sorry lovers. – Robert Gabriel

9pm, Antone's A contemporary of Lou Reed and Bob Dylan, Garland Jeffreys' music is the sound of his multicultural, inner-city roots. The NYC singer-songwriter has been electrifying audiences for more than 30 years and just issued I'm Alive (Universal International), a best-of with three new tracks. – Jim Caligiuri

9:15pm, Emo's Main Room Recalling their three-song set with Nirvana for MTV's Unplugged, grunge pioneers Curt and Cris Kirkwood reunited the Meat Puppets by joining Army of Anyone onstage last month at La Zona Rosa. The brothers, along with new drummer Ted Marcus, are completing their first album together since 1995's No Joke! – Austin Powell

9:30pm, Red Eyed Fly With a swagger that recalls the Rolling Stones and the roots that point to early Whiskeytown, Detroit's Deadstring Brothers are poised for greatness. 2006's Starving Winter Report (Bloodshot) was refreshingly melodic, and the young quintet is currently in the studio recording a follow-up. – Jim Caligiuri

10pm, Stubb's From the sounds of their forthcoming third LP, Because of the Times, Nashville's kings of Southern boogie pulled off the unimaginable: an album extract of jams that coalesces into another crown jewel. Neither as compositionally sound as 2004's Aha Shake Heartbreak nor as coltish as '03's Youth & Young Manhood, No. 3's "Knocked Up" and "Camaro" barrel down KoL's new Autobahn. – Raoul Hernandez

10pm, 18th Floor @ the Hilton Spending a better part of 2006 conducting her musical seances solo, Concrete Blonde's frontwoman remains at her most fierce and playful when she goes it alone. Pray that's the case here. Her Sketchbooks are sold out, but look for the upcoming Vault page on her Web site. Perhaps her ferocious cover of "Mercedes Benz" made the cut. – Raoul Hernandez

10pm, Mohawk Patio Distinctively Austin, LCT has been mesmerizing local audiences with their whimsical lo-fi pop 'n' country for the better part of a decade now. The quintet was recently seen on TV's Friday Night Lights and are ready to release the follow-up to the highly praised … In All Their Splendor (Glurp). – Jim Caligiuri

10pm, Latitude 30 This Philly trio's psych pop is like listening to music made on drugs by people who listen to music made on drugs. Their latest, An Amazing Dream (Rainbow Quartz), is moody British pop with an early-Sixties drug dealer, full of lysergic explosions and tremolo attacks. – Audra Schroeder

11pm, Bourbon Rocks Huffed any paint lately? Spend an hour in the company of Lions, and you might answer different. Barely 2 years old, the Austin quartet is one of Red River's biggest draws, tweaking the best of Detroit rock city (Kiss, MC5) with rotten backwoods Texas attitude. Last year's debut EP, Volume One, has some powerful fumes indeed. – Christopher Gray

11pm, Mohawk Patio If you have the good fortune to stumble drunkenly into a Moonlight Towers show – and that's the most appropriate way to enjoy them – you'll be so enthralled with the Austin quartet's bar-band greatness that you'll miss the obvious influences. Underneath the rawkus riffage, there's an undeniable love for all things pop. – Michael Bertin

11pm, Stubb's We lost Britt Daniel to Portland, Ore., but that doesn't mean we love Spoon any less. Fifth LP Gimme Fiction reaffirmed Daniel's love of minimalist indie rock, and with a newbie getting the Mike McCarthy shine in studio, expect lots of new gems splayed with Jim Eno's pitch-perfect beat and new bassist Robert Pope, formerly of the Get Up Kids. – Darcie Stevens

11pm, Emo's Annex This Latin music juggernaut is one of Austin's premier (and luckiest) bands; they so impressed Prince that he hired them to play Thursday nights at his 3121 club in Vegas. Grupo's third album, Comes Alive, was recorded in Austin and captures the percussive intensity of their live shows. Come ready to dance to one of the best bands you'll hear all weekend. – Jay Trachtenberg

11pm, Jovita's Taking a hefty dash of pepper from the Texas Tornados' oeuvre and adding it to the legacy of Doug Sahm's meaty career, Shawn Sahm & the Tex Mex Experience are definitely not your average plate of tacos. The younger Sahm's fearless rendering of San Antonio guitar grooves are matched by Nuni Rubio's good looks and caliente vocals. – Margaret Moser

12mid, Beauty Bar Patio Faster than you can say hi to your mom or clap your hands and say yeah, the robotic garage rock of Toronto's Tokyo Police Club will make you look good on the dance floor. The gang of four's debut EP, A Lesson in Crime, is an open and shut case of Strokesian juvenile delinquency. – Austin Powell

12mid, Spiros Just when this L.A. band lulls with a traditional folk tune on their new Die Cowboy Die, they roar back with a blast of high octane. Traditional or contemporary, Latin or folk, they borrow from all and reignite with passion. Martha Gonzalez's supple vocals and

12:45am, Emo's Main Room "Bro, are you going to Turbronegro?" "I don't know, brah. Last time my bro rider broke down and I had to get a ride from some skeevs who wouldn't bro down, and Turbro didn't play anything from Ass Cobra." "Dude, they're bro-punk royalty." "My girl wants to go to Midlake." "Bros before ho's." "Fine. But that's another bro job you owe me." – Christopher Gray

12:45am, Momo's The world is shit, and K'Naan knows it. The Somalian native, who makes Toronto home, flows political: old home, wartime, racist Swedes. After a year touring with Mos Def, Talib Kweli, and Damian "Jr. Gong" Marley, his mix of African beats and poetry are finally gathering limelight. 2005's Juno-winning The Dusty Foot Philosopher was only an introduction. – Darcie Stevens

1am, Exodus This stutter-happy Danish candy-pop duo hasn't released an album in the States since 2003's D-D-Don't Stop the Beat. Even with the Earth, Wind & Fire/New Edition/Madonna hybrid "Itch U Can't Scratch," Junior Senior's 2005 album, Hey Hey My My Yo Yo, never got to America. But fret not, for new single "Take My Time" features Kate and Cindy from the B-52s. – Greg Beets

1am, Elephant Room Austin may be known for rockers and singer-songwriters, but jazzers like Elias Haslinger are putting Slackerville on the improvised map. His fresh Dream Story (Cherrywood) is the tenor and soprano saxophonist's fourth anthology of original jazz. Haslinger recently returned to Austin after a successful tenure in New York. – David Lynch

1:30am, Cedar Street Courtyard "Funk Doctor Spock" surely hasn't given up smoking blunts. Thus Redman's head should still be in the same cloud that made the Newark rapper a household fixture for at least as long as Hollywood has milked the "How High" concept. Silliness aside, Redman is a relentlessly clever lyricist, able to deliver witty punch lines with the strength of seven bong loads. – Robert Gabriel