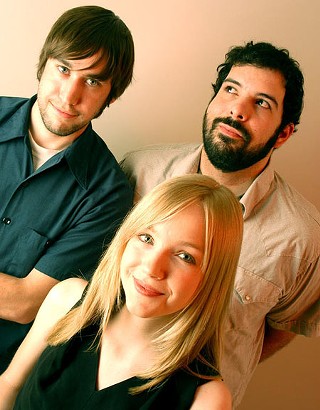 Ume, 1am, Tap Room @ Six (see below)
All showcases subject to change

The Soul of John Black

8pm, Continental Club Delving deeper into blues on his second album, The Good Girl Blues, John Bigham gives the music a funky, modern burnish without sacrificing its strong southern roots. The L.A.-based soul man is a left-handed guitar slinger but also put in time as a percussionist with Miles Davis. – Jay Trachtenberg

8pm, Red 7 South African songwriter Chris Letcher, who currently studies music composition for film at the Royal College of Music in London, composes avant-pop through a Spectorian scope. His fifth LP, Frieze, is like a delicate ice sculpture whose beauty must be appreciated from a distance. – Austin Powell

8pm, Lava Lounge Patio Just in case you're Wincing the Night Away about no longer being able to see the Shins in a moderately sized venue, give Austin's Shapes Have Fangs a try. Dustin Coffey's mercurially pitched vocals slide down Chutes Too Narrow, moments of garage-pop rawness on SHF's upcoming debut establishing a bit of their own "New Slang." – Doug Freeman

8pm, Copa On Ciaran McFeely's follow-up to 1, the Irish songwriter takes his folktronic Britpop to the next level. 2 to be precise. What he lacks in creative naming, McFeely, aka Simple Kid, amends with music that's complex: slacker-smart lyrics, electronic indulgences, Parsons-esque country, and Kinks-ian pop. In America, we call it Beck. – Doug Freeman

8:30pm, Habana Calle 6 Distorted but clean guitars. Precision rhythm. Shout singing. Are we to postmodern rock yet? The trio's A New Canvas is out on TVT this year. Faster, le pussycat. But don't kill. – Michael Bertin

9pm, Ale House Armed only with a baritone ukulele, Montreal's Krista Muir – the L.L. stands for her better-known alter ego, Lederhosen Lucil – plucks through songs about ... well, we don't know. Our French sucks. These aren't your grandpa's island ukulele tunes, though. – Darcie Stevens

10pm, Friends This quartet from L.A.'s Echo Park released its debut LP, Fascination (Retone), last summer and with it scored a solid seven on the "I saw them when" scale. Pushing that number toward the high side is frontwoman Annalee Grey as she's got total it-girl qualities. Her childlike-but-sultry voice punctuates the playful cool of the band's hypno-indie sound. – Michael Bertin

10pm, Redrum There's something admirable about a band that, in eight letters and one piece of punctuation, write off any shot at mainstream commercial success. The Milwaukee quartet's hardcore punk is a perfect fit for anyone with the attention span of a ferret on crack. – Michael Bertin

10pm, Buffalo Billiards The chamber pop of Ontario's A Northern Chorus fills in the gaps with silence and tension. Fourth release The Millions Too Many (Sonic Unyon) fuses the foundations of pop with violin and cello, creating an expansive collaboration of drama and joy. – Darcie Stevens

10pm, Lava Lounge Patio If you begin with an offensive name, does everything just fall into place? Montreal garage punk fourpiece CPC Gangbangs just wants to tear shit up. Their newest consideration, a split with fellow Montreal punks the Confusers, blasts back to late-Eighties hardcore with just a hint of the MC5. – Darcie Stevens

10pm, Blender Bar @ the Ritz It takes a certain amount of unconcerned hipster panache to pull off a faux pas such as white denim, and the same is true of the relatively new Austin post-punkers' sound as well. The group threads primal rhythms with glam and riotous chanting that manage to still move a dance floor. – Doug Freeman

10:05pm, Visions Austin's KJ Hines exudes the youthful enthusiasm necessary to pull off rap music as something fun rather than as something so vain it makes you sick. Not that KJ's teenage swagger doesn't come across as determinedly cocky, but his single "Capital City" received so many repeated spins on local outlets that the unifying effect of the song excuses any possible narcissism on his behalf. – Robert Gabriel

10:30pm, Visions Take a serious look back to where Houston rap acquired its pensive "never seen a man cry 'til I seen a man die" personality and you'll discover from the get-go it was K-Rino and South Park Coalition steering it along that self-reflective path. Klondike Kat and Dope-E dissect hood predicaments with razor-sharp precision. – Robert Gabriel

Kidz in the Hall

11pm, Visions Chicago's Naledge (Jabari Evans) and Jersey DJ Double-O (Michal Aguilar) started the collaboration that became Kidz in the Hall when the former met the latter on a recruiting trip to the University of Pennsylvania. While there's plenty of "Yeah … yeah …" on 2006 debut School Was My Hustle, the total package is far more musical than your average hip-hop. – Michael Bertin

11pm, Momo's From the ashes of the Ramones comes ... a bluegrass band. Tommy Ramone's second act is Uncle Monk, a duo he co-fronts with vocalist/guitarist Claudia Tienan. The upstate New York act's debut is due May 22.

12mid, Red Eyed Fly Thunderbirds Are Now! is less a band than an experience. The Detroit quartet has released two EPs and two LPs with Frenchkiss, the most recent being last year's Make History, but the true hallmark of the band is their live shows, which routinely spill members and instruments from the stage and into the equally frenzied crowd. – Doug Freeman

Rebuilding the Rights of Statues

12mid, Friends Bart Davenport's white-boy falsetto oozes Boz Scaggs with dollops of Lambchop and Shuggie Otis in this tuneful take on Seventies soul. Live, the manic fwapping of RV Salters on synth and Tony Sevener's concussive paw pummeling of an MPC (vs. pre-sequenced beats), proves this SF combo more thrashy than their satiny 2006 The Day I Turned to Glass (Quannum) might imply.

12mid, Beauty Bar Don't confuse Toronto's Holy Fuck with Toronto's Fucked Up. Sure, they've both got fucking cool names and share the same fucking hometown. But the fucking similarities end there. Holy Fuck is fucking out there: improvised electronic music without the aid of standard genre crutches (laptops, tape loops). – Michael Bertin

12mid, Room 710 Austin fivepiece the Glass Family is more than just Salinger fiction. Michael Winningham's songwriting dives into love and life and left a knowing impression with 2005's textural Sleep Inside This Wheel (I Eat Records). With a newbie on the horizon, the Family promises greatness beyond trite pop. – Darcie Stevens

12:45am, Habana Calle 6 1986's name begs a brief history lesson. It's the year before the Replacements' Pleased to Meet Me and Dinosaur Jr.'s You're Living All Over Me. Who knows why it's not 1987, but the trio led by sometime Austinite (and Rosebuds bassist) Giorgio Angelini is vintage alt-rock all the way, fuzzed-out melodies in fine form on 2006 debut Nihilism Is Nothing to Worry About (Palentine). – Christopher Gray

1am, Momo's Founded on the premise that heavy songs (OutKast, Green Day, Franz Ferdinand) could be bluegrassed, North Carolina/Nashville quartet Hayseed Dixie has – thanks to this year's Weapons of Grass Destruction (Dualtone) – made it to seven albums. AC/DC are fans, too. – David Lynch

1am, Tap Room @ Six If the petite Lauren Langner Larson were walking down the street nonchalantly, you'd have no clue of her Kim Gordonness. Onstage with her Austin trio, Larson freaks out, blond hair flailing, guitar light as air. With her husband Eric on bass and Jeff Barrera on drums, Larson's Ume is a reckoning force, as evidenced on 2005's debut, Urgent Sea (Pretty Activity). – Darcie Stevens