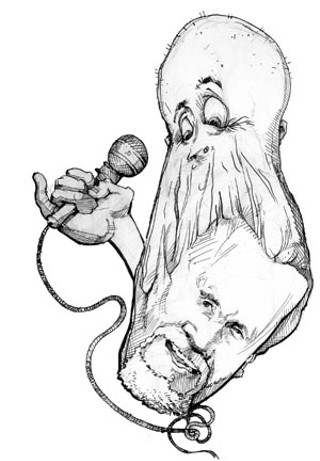 It's rodeo time, y'all, starting with Friday's traditional Cowboy Breakfast at Auditorium Shores (6am) before moving over to the Travis County Exposition Center grounds, 7311 Decker Ln. Besides an outdoor stage of local bands and surefire show-stealer Whiplash the Cowboy Monkey (see www.rodeoaustin.com), here are your 2007 arena headliners, Soundcheck style:

Okie plays "One Chord Song," others.

Young Denton lions think "Everything Is You."

Nip/Tuck with "The Gambler."

Give him that wink. 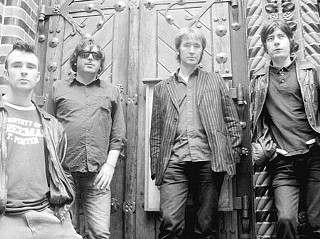 For SXSW's ever-increasing roster of international bands, sometimes getting here is half the battle. "It's getting harder and harder," says Brooklyn-based publicist Fiona Bloom, who works with several overseas acts. To even qualify for a visa, she notes, "It doesn't matter if you've been a musician all your life, you have to have been in that group for 12 months or more." Moreover, adds Bloom, bands can run up huge tabs hiring attorneys to sort through all the red tape. It may not happen often ("Not that many that we're aware of," says SXSW Music Creative Director Brent Grulke), but it happens, sometimes to some of SXSW's biggest buzz bands: Scots the View and South Africans Wild Eyes this year, Iranians 127 in 2005. "The cash to acquire a visa is probably a greater issue than being denied one for most acts," Grulke notes. Some bands won't even know if their paperwork is in order until zero hour. "To be absolutely honest, we have no idea how difficult it will be," admits Mark Mulholland of Berlin alt.country quartet Two Dollar Bash, scheduled for 1am March 17 at Jovita's. "We'll find out next week when we try to cross the border." See our International Bands Supplement, starting with the UK, for more. 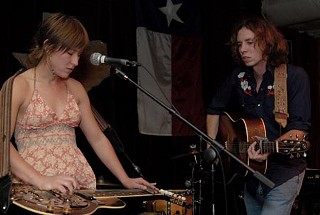 Austin "New Age country" duo the Lonesome Heroes have so many gigs, "We're still really just figuring out what we're doing, and it stems from playing so much," says Brooklyn-born Rich Russell. Navigating country, folk, indie rock, and Daniel Lanois arcana, Russell and San Marcos native Landry McMeans, who alternate Dobro and acoustic guitar and lately have been borrowing the Weary Boys' rhythm section, met two years ago at the Austin Music Co-op. "Living there made us realize how hard you have to work to be a musician," says McMeans. The Heroes weren't sure where they fit in locally until hearing Li'l Cap'n Travis on KUT's LiveSet. "I was like, 'We're going to the Continental Club tomorrow!'" Russell says. After 2006 EP Don't Play to Lose on St. Paul, Minn.'s Floodwater Records (an LP recorded live at Flipnotics is due soon), things picked up when the Heroes began hosting Headhunters' popular Wednesday alt.country night, where they've welcomed American Graveyard, the Texas Sapphires, Brennen Leigh, Gary Newcomb Trio, Boxcar Preachers, and the Breathers. "Headhunters likes it because it's mellow, a nice change from the rest of the week," says Russell. The Heroes play Mean-Eyed Cat, 7pm tonight (Thursday), before a brief trip back East and several gigs during South by Southwest weekend.

There's no greater digit in U2 numerology than "One," so for their first-anniversary show tonight (Thursday) at Fadó, Austin tribute band Mysterious Ways needed an appropriately grand gesture. Inspired by the "Where the Streets Have No Name" video, they decided upon a short rooftop set (7pm) but weren't quite sure on Monday how to get their gear up there. "They're supplying a bunch of guys to help us bring it up with a ladder," laughs lead singer Patrick Fleming. Mysterious Ways began when Fadó manager Robin Moran suggested the idea to Fleming, who was already playing the Warehouse District pub as a solo act. Quickly graduating to weekends, where they alternate Friday and Saturday nights, the group – guitarist Buffalo Speedway, bassist John Kelley, drummer Damon Alexander – has now worked up more than 50 U2 songs. "They're not as straightforward a band as I thought they'd be," admits Fleming. "Sometimes their structure is skewed. You really have to pay attention." MW also play Fadó's new stage 10pm tonight and Friday.

• Along with 12 other U.S. universities, the University of Texas at Austin was warned last Wednesday by the Recording Industry Association of America of possible illegal file-sharing by 33 of its network users. "UT considers possible copyright infringement by users of its service to be a serious matter," the Office of the Dean of Students said in a prepared statement. "Its Acceptable Use Policy for computer and information technology reminds users that participation in copyright infringement is a violation of university policy and federal law." UT forwarded the RIAA warning to each of the alleged violators.

• The producers of Cry-Baby, the new Broadway musical based on the 1990 John Waters film starring Johnny Depp, have an open audition for the lead 3-7pm March 17 at the City Theatre, 3823 Airport. If you know a "super-sexy, charismatic rocker and gang leader who has a hard edge, but everyone loves him," this could be his big break.

• Sunny Sweeney, whose Heartbreaker's Hall of Fame was re-released Tuesday on Nashville's Big Machine Records, became the latest Austin artist to play the Grand Ole Opry last Friday. "It rocked!" she says. "I even got [bassist Chris] Grady in a suit." Sweeney plays a pair of release shows Friday, 5pm at Waterloo Records and 10pm at Midnight Rodeo.

• Beerland owners Randall and Donya Stockton's new coffeehouse/lounge, Rio Rita, opened Monday morning at 1308 E. Sixth. It's Wi-Fi-ready with soups, sandwiches, and beers (wine soon) and no annoying live music to drown out conversation. Folks already say it's a nice place to "knock a few back without the annoying babble of your average bar scene."

• The Misprint magazine crew will have copies of new SXSWhatever issue Friday at the Side Bar. Articles include "Mom by Momwest," "Misprint vs. Papa Roach," "How to Pass a Drug Test," and an interview with Voxtrot frontman Ramesh Srivastava. "That dude's an all right guy," opines Misprint's Bryan Keplesky.