Although Charlie Louvin's first album in a decade features vocals from country legends (George Jones, Bobby Bare, Tom T. Hall) and indie icons (Jeff Tweedy, Elvis Costello, Will Oldham), the voice that rings loudest is the one never heard. Returning to the canon he and his brother Ira stamped as Louvin Brothers classics, Charlie's voice on the album carries a weary, lonesome joy – proud of the Louvin legacy but endlessly haunted by the high harmony that's been missing since Ira's alcoholism forced Charlie to disband the duo in 1963. Ira's tragic death followed two years later.

"I really didn't have a choice," Louvin says of breaking with his brother. "It was hard to get dates. The news got out that if you wanted to use the Louvin Brothers you were just buying problems. There's never nobody said Ira Louvin's drunk. They say the Louvin Brothers was drunk. And I don't even drink."

Charlie Louvin the album represents a reckoning with past and present. On "Ira," the penultimate track and disc's poignant core, the younger Louvin, 79, sings a wavering tribute to his brother. "Alabama to the Opry was the second hardest road. The worst was me losing you and singing all alone," croons Louvin lowly, his voice trembling as much toward redemption as remembrance.

"There are no Ira Louvins around," says Charlie. "I wouldn't dare try to put out a duet to sound like a Louvin Brothers. If I took a boy who was good and sang good, they'd tell me, 'Well, that ol' boy you got, he's pretty good, but he ain't no Ira Louvin.' And I'd say, 'Hell, I knew that before I left home.'" – Doug Freeman

"I grew up with a Fisher-Price karaoke tape player and the Beach Boys," laughs Beirut's Zach Condon. That experimentation with sound has blossomed into a full-fledged musical obsession for the 21-year-old New Mexican. You name it, Condon plays it: French horn, mandolin, piano, accordion, Farfisa, glockenspiel, ukulele, gorgeous trumpet.

Beirut's debut LP, Gulag Orkestar (Ba Da Bing), is a Tin Pan Alley symphony, a ball of humanity and emotion pulsating out the end of his horn and against his Johnny Mercer vocals, all through the fiddle and beats of A Hawk & a Hacksaw's Heather Prost and Jeremy Barnes. It's an Eastern European block party.

The gospel spread quickly, and Condon, with a revolving crew of 10 or 11, ventured out on his first tour last year. Unfortunately, it ended in disaster one night on the streets of Paris.

"Basically I just fell apart," he sighs. "It was my first tour; I guess it was bound to happen. I was pushing myself too hard. All of a sudden, my body was doing different things than my mind.

"It got to the point where I actually thought I was going insane," Condon continues. "It's almost like a storybook ending: I crash and burn right by the time I finally make it there."

Currently on "sabbatical" in Albuquerque, Condon plans a return to NYC and the road. With any luck, this time around will go much smoother. Besides tonight's showcase, Beirut plays live on Seattle's KEXP Radio 7pm Friday at the Austin City Limits studio. – Darcie Stevens

Thirty years ago, the Stranglers crawled from the London sewers with Rattus Norvegicus, a giddily spiteful nest of gnawing melodies that was instantly, and incorrectly, tagged and bagged beside period punk rock.

"One Christmas eve I was standing in a pub watching the Pirates without Johnny Kidd," recalls former lead singer Hugh Cornwell. "There were a lot of teddy boys, who hated punks, in the audience. I ended up talking to this big, big Ted, this huge bloke, and I told him, 'Listen, a lot of people say we're punk but we're not, really. We just write great songs with a lot of energy.'"

Cornwell eventually tired of the papers plastering this punk pose on the Stranglers and slipped the noose in 1990, after 10 albums and 21 Top 40 singles.

Seven solo albums on, "I'm more able to express myself," he says. "The image manufactured for the Stranglers was so strong it was almost like being in prison. It's always difficult to break away from something that distinct, but in the end it got, well, boring." – Marc Savlov

Psych-folk rides a lonesome mirage at the intersection of honky-tonk and Haight-Ashbury. Pat Sullivan's sextet Oakley Hall leads this genre-bending movement with electrified strings and former Austinite and Windsor for the Derby drummer Greg Anderson's swing. It's a modernized version of every song you ever grew up with, yoking Willie Nelson to Sir Douglas Quintet.

Last year the proficient outfit stamped two LPs, the countrified Second Guessing and more Krautrock Gypsum Strings, and logged nearly six months on tour. Now in-studio working up a Merge debut, they head out with Bright Eyes next month. Oakley's mix of dissonant harmonies, slurred guitars, and Mogel's amplified violin jump from dusty to trippy, but Sullivan's dark songwriting places the band in a category all its own.

"He's first and foremost a songwriter, a lyricist, and that's what makes it really special," says Anderson. "We have all these great songs that are stories." – Darcie Stevens

In their case, three's a pair. Kelsey Wickliffe handles her turquoise Fender like Heartbreaker Johnny Thunders, a cocked and ready pistol. Alongside her partner in crime, drummer Erica Barton, the sirens' flirtatious, biting vocals wrap around Baldomero Valdez's fretwork for a titillating ménage à trois.

"We take turns being the wild one," quips Barton from behind her kit at the band's practice space, lined with posters of Sonic Youth, Nirvana, and Pink Floyd. "We just exchange Baldomero as our date."

"Really, all of our songs are about intimacy," offers fourth-grade Spanish teacher Valdez. "It's either the longing, actual physical act, or the aftermath."

That's even true for the risqué, fetishized tale of the "One Arm Man," told in power chords and Barton's high-pitched squeal.

"There's a guy with this half-wooden arm that always walks in the park in Denton," she explains. "One of my friends thought he was really sexy and decided one day to leave him a note with her phone number. She actually went out on a date with him."

It's this edge between seductive and scandalous that makes the Werewolves' call so invigorating. "Just wait until Baldie gets a bit more comfortable on stage," Wickliffe adds. "He'll start getting naked." – Austin Powell 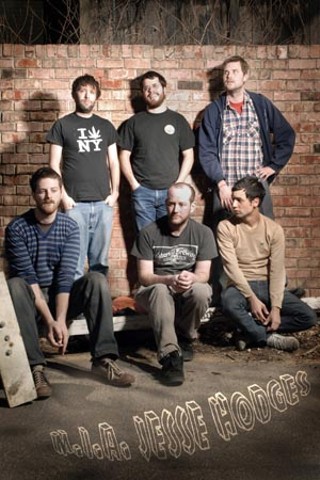 "We're trying to create a weird amalgam of all the different bands we were in," offers voice No. 1 Jesse Hodges with a chuckle, "but more communal and more rock & roll. We're not telling dick and fart jokes, basically. It's beyond that. We feel comfortable enough to laugh. It's supposed to be fun."

"It's like digging through your trash and finding leftovers," grins drummer No. 1 Doyle.

Dinos' 2006 Emperor Jones debut, Snacks, has weird down pat in 27 minutes of psychedelic guitar and punishing beats. They're gearing up for a sophomore LP with a new track on a Cardboard Records comp and an Oneida cover for Hodges' Furniture Records' tape-only singles club, Sheets of Easter Everywhere. (austinchronicle.com/gyrobase/Music/?oid=oid%3A450034.) All that and still the cohesion between songs, projects, and Dinosaurs hums.

"I remember Cory saying he was really excited to be in a straight-ahead rock band," reminisces Doyle. "It feels good just to be in a rock band and play loud." – Darcie Stevens