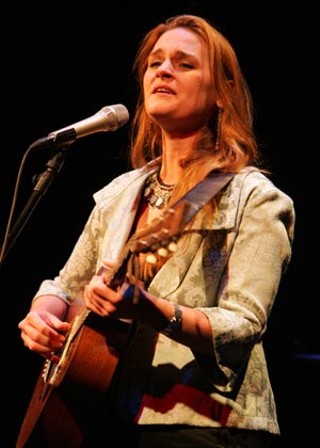 Madeleine Peyroux isn't an entertainer. The 32-year-old Athens, Ga.-born chanteuse doesn't flirt, bat eyelashes, or doll up. Peyroux's a musician alone, hiding behind her miniature Martin acoustic and fourpiece accompaniment, while growling Billie Holiday and cracking intermittent jokes about duel lovers, booze, and her father. The notoriously shy songbird seemed uncomfortable on the Paramount stage, turning her back to the sold-out crowd, gazing downward, fidgeting, and laughing nervously. Maybe her years spent busking on the streets of Paris enamored her of anonymity. Either way, her muses dial up contemporary (Serge Gainsbourg, Randy Newman, Tom Waits), while her delivery is nostalgic. Opening with the "sexy," Leonard Cohen-penned "Blue Alert," Peyroux dove into the jazz repertoire in which she shines brightest. Cohen was well-represented (latest LP title track "Half the Perfect World," "Dance Me to the End of Love"), but the standards were where Peyroux chilled ("I Hear Music," "J'ai Deux Amours"). Her reinterpretations of Hank Williams, in a minor key, and Patsy Cline, slow and drawn out, provided a glimpse into the modern cantor's soul, but her co-written flow of the bluesy "A Little Bit" and killer "I'm All Right" – written with the help of Steely Dan's Walter Becker – demonstrated that she doesn't belong under the covers forever. Just before the end of Peyroux's 90-minute set, the New Yorker gave a "Smile" and with it sent jazz lovers out with hope. Peyroux might not be an excellent performer, but she's one of few resurrecting jazz for the mainstream, although she stressed, "We're not playing jazz. We're playing music."