Australia and New Zealand flush the opposite direction

Still, reflecting a low-level national nervousness, this year's recruiting class of Aussies is decidedly safe. That might be an oversimplification, but, save for experimental folkster Ian Wadley, the biggest names have a couple of decades of good days in the rearview mirror already. And what comforting rock that is.

Sure, it's been more than 20 years since Hoodoo Gurus declared, "All my friends are dead or they're dying" (hey, you guys weren't friends with Steve Irwin were you?), but the Aughties have brought the band back into the fold. 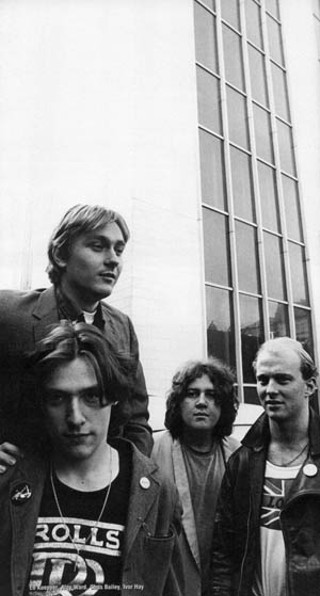 The Saints (back in the day)

If it's punk you want, you got it: The Saints are to Australia as the Ramones are to America as the Sex Pistols are to the UK. Sorry for going all SAT on you.

One of the better-named bands ever, the Beasts of Bourbon, has been around longer than some of their compatriot South by Southwest representatives have been alive. Letting there be rock are Melbourne's Airbourne and Adelaide's Wolf & Cub, the former being a shamelessly wonderful homage to the Young brothers, and the latter being the 'Stralian Mars Volta. Letting there be indie rock is Architecture in Helsinki, and it totally makes sense that they would be from Melbourne with that name. Eight sweater-clad, antipodal brothers and sisters of the bygone Elephant Six days drop post-acid Beach Boys into splashy, Seventies AM pop. If that doesn't register, they get cool cred having toured in support of Clap Your Hands Say Yeah.

Sydneysiders Brave Radar take lo-fi to new, uh, lows (maybe like the Mountain Goats after a Thorazine bender), while citymates the Presets go post-rock retro with their electro-pop powerage. Spod go the other chronological direction with a retro-future dance concoction that's got more than just a little debonair swagger to it. Really, with lyrics such as "Get your fuck on, get get your fuck on," subtlety is clearly not the band's forte. And Starky comes to Austin just off supporting the Killers (the band, not actual ones) on their Australian tour. Strange mix of Spiritualized, Galaxie 500, and Trail of Dead.

Expatriate spent part of last year in Seattle recording their debut with John Goodmanson (Death Cab for Cutie, Wu Tang Clan) and whiled away the better part of their youth listening to Ian McCulloch. I Heart Hiroshima sounds a little like every band out of Boston in the Nineties that had either a Deal or a Hersh in it. Teenage Fanclub fans Youth Group breathe new life into Robert Quine's guitar lines, and vets of Austin's bygone New Sincerity era will find an immediate affinity for Brisbane sixpiece the Zebras, whose basic operating tenet seems to be if you can't say it under three minutes, it's not worth saying.

Also on the docket is a sampling of every flavour (note proper spelling) of Britpop available. The Gear returns to SXSW straight off an appearance on Shindig! (Nice time travel trick, guys. Did you learn that from Darren Daulton?) You Am I preserves pieces of the Village Green with some help from booze or volume or both. The duo of Heath and Johnny, aka Children Collide (lost in the accident were their surnames), do a great job tricking up the genre with Ian MacKaye punk additives but without the exhaustion of having to be all core all the time. And a lazy observer might call Evermore Sydney's sequel to Coldplay. So let's go with that.

Singer-songwriters include the uncannily American George Byrne. It's meant as a compliment, as Byrne has a bit of a Ryan Adams edge to him. Josh Pyke is a little like Mark Linkous and a little like Elliott Smith, but far less dismal than the former and a lot less dead than the latter.

Stretching the genre definition is Macromantics. A former member of Ben Lee's grunge syndicate Noise Addict, Macromantics' Romy Hoffman is now a rapper, and her debut, Moments in Movement, is being released stateside via Kill Rock Stars. The best of the lot might be Via Tania (aka Tania Bowers), who comes from Melbourne via Chicago and has the same effortless charm as Norah Jones. She's Beth Gibbons without the haunt and Macy Gray without the nasal problems.

Finally, Sunwrae asks just one question: Are you ready to rock? No? Great. Because their nu-chamber-music ain't exactly ass-kicking, but the flex lineup of woodwinds and strings with some vibes is a wonderful soundtrack for an NPR feature or perhaps for those not about to rock but in need of a nap instead.

For the Kiwis, on the other hand, no news is no news. Really, when was the last time any world-grabbing headline came out of Aotearoa? You win another sailing race someplace? Another D&D elf epic in production?

Well, maybe the boredom has some spillover benefits. Really, New Zealand couldn't even manage to drum up a band that really fits the country's namesake genre of New Zealand pop. Save for maybe one. Remember Straitjacket Fits? No? Okay. Well, Dimmer came out of their demise (before their recent reunion). At its core, the fourpiece still flashes vestiges of the strum that gave the genus its name, but now it's got a little more noise dripped over the top.

But you want to get weird. The kiwis are upping the ante on weird. First up is So So Modern. If you're wearing matching hoodies onstage, you better be able to bring it. Sorry to steal the term, but the band's spastic electroclash really is pissyourpantstastic. Similarly, there's the wicked Devo-meets-the-Buzzcocks experimental garage mix of the Mint Chicks. (Note: not chicks.)

Auckland's Gasoline Cowboy has a top-shelf name, and their self-descriptive prog-folk is even better. Well played, gentlemen (golf clap). And if you like your punk a little less fringe but still not completely rote, there's Die! Die! Die! The Dunedin trio isn't just another minor threat and has been touring relentlessly behind their Albini-produced debut. For punk, this stuff is seriously serious.

For more straight-ahead fare, Elemeno P's straight-up guitar rock has made them one of NZ's biggest-selling acts while nu-metal act Blindspott were the first New Zealand band to have both of their first two albums debut in the charts at numero uno. And holy riffage, Batman! Cut Off Your Hands is a Gang of Four throwback to that brief period after punk before things all went wrong with skinny ties.

Finally, the Kiwis are sending a couple of dynamite voices. First – and don't take this the wrong way – did Carly Binding win some sort of contest? Because she totally sounds like Kelly Clarkson. Too bad there's no teenage vote at SXSW. Then there's Bic Runga doing Hope Sandoval doing Burt Bacharach's minor-keyed catalog in half time. Someone should book odds that Runga is the only SXSW 07 performer whose mother was a Chinese/Malaysian lounge singer. Easy money. And having a little action on SXSW couldn't help but make things just a little more interesting.

The Saints (Brisbane) Blender Bar @ the Ritz, Sat., 1am; www.myspace.com/dothepopthesaints