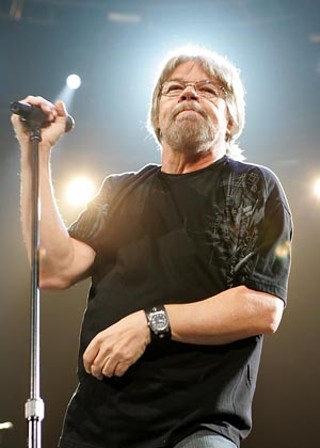 Not that an arena brimming with duppies (old urban professionals) noticed or even cared, but Thin Lizzy's "The Boys Are Back in Town" as the Silver Bullet Band's entrance cue was a nice touch. An early-Seventies tour pitted both crews against one another every night at the afterparty, resulting in Lizzy's Phil Lynott adopting Bob Seger's "Rosalie" as his own. At 61, Seger returned the favor, Lynott's anthem to "them wild-eyed boys that had been away" priming the Dearborn, Mich., native's first tour in more than a decade. Besotted with a genuinely infectious bonhomie, Seger and company's two-hour march through his catalog was an exercise in disbelief. If Seger didn't do "Rosalie," he didn't perform at least another hour of sure hits from his great American songbook, memorables like "You'll Accompany Me," "Still the Same," "Her Strut," "Like a Rock," and on and on. Fronting an eightpiece with the optional four-man horn section, grandpa Seger donned a headband after the photographers departed, pumped his fists without pause, and let loose a gravelly voice straight out of commercial radio's lost soul. Last year's rock-solid Face the Promise placed half its tracks (*) among Seger's old-time rock & rollers and never missed a beat, particularly thumpers "Wreck This Heart," "Face the Promise," and "Real Mean Bottle," an LP duet with Kid Rock but here featuring none other than Grand Funk Railroad/SBB drummer Don Brewer. With Seger at the piano, "We've Got Tonight" and then "Turn the Page" preceded their author wondering whether it really had been 32 years since Live Bullet, but "Travelin' Man" into "Beautiful Loser" rendered the point moot. Same for '68's "Ramblin' Gamblin' Man," not to mention "Katmandu" and "Horizontal Bop." When Seger sang the opening lines to "Night Moves" in the first encore ("I was a little too tall, coulda used a few pounds"), the reverse was actually true, but if "Rock & Roll Never Forgets," then Motor City's other assembly line of timelessness remains a most "Beautiful Loser."

"Tryin' to Live My Life Without You"

"Down on Main Street"

"Betty Lou's Getting Out Tonight"

"The Answer's in the Question"*