Sixth Street indie-rock outpost the Parish and downstairs Louisiana kitchen Jazz are on the verge of being sold to a group of investors that includes the general manager of popular lakefront restaraunt/bar Carlos'n Charlie's, TCB learned this week. According to Jazz and Parish general manager Chad Stevenson, current owner Matthew Reppert will retain title to the building but has been looking to sell both businesses for a while. "A letter of intent [to sell] has been signed," Stevenson says. "Now they're just crunching numbers." Beloved among musicians and scenesters for its acoustics and warm ambience, the Parish has at times struggled financially, though Stevenson says profits have been up recently. For the moment, nothing much should change, and he emphasizes that the club is not shutting down. "We're not going to have any foreseeable lag," Stevenson says. "We're still booking for now." However, Parish booker and Zykos frontman Mike Booher leaves next week to assume local-booking duties at Emo's from former Misra Records owner Phil Waldorf. Misra merged with Bay area label Absolutely Kosher last month, and Waldorf says since he already wasn't seeing eye-to-eye with his Misra partners, "it seemed like a good time to step aside." Misra bands Shearwater and Evangelicals have drawn major interest from Matador and Nettwerk, and Waldorf himself is about to start his own label with backing from a major indie he's not quite ready to name. "As soon as we get a couple of records into production, we'll feel comfortable announcing it," he says, adding a Misra band or two almost certainly will follow him. Zykos, meanwhile, is comfortably without a label but has recorded more than two dozen new demos, some of which they've taken to Spoon and Trail of Dead producer Mike McCarthy. The fivepiece, whose last LP was 2004's Zykos, recently posted a four-song downloadable EP on their MySpace page. "Our Web site got hacked, and we haven't fixed it yet," explains Booher.

Still struggling in the ratings, NBC's Friday Night Lights continues mining the Austin music scene. This week's beneficiaries were Li'l Cap'n Travis, who filmed a scene Friday afternoon at the Continental Club. "It was kind of silly," singer/guitarist Matt Kinsey reports. "We had to do some pantomiming while they recorded dialogue, and that makes you feel like a dork." The band played "3.2 Beer of Love" and "Sugar Buzz" in the scene that Kinsey says involves quadriplegic former quarterback Jason Street's wheelchair-rugby team. "I don't want to spoil anything for you," he smiles. "Sugar Buzz" is from LCT's forthcoming album, which Kinsey says should be out in a couple of months. "It sounds great," he says. "It's got our version of a couple soulish-type tunes. I wouldn't go all the way and say they're soul tunes." FNL also recently revisited the Broken Spoke to film a scene that climaxes with a fight in the parking lot. "We've had those before," says Spoke owner James White, who appears as a bartender. "Thank goodness they were back in the Sixties and Seventies."

The University of Texas athletics department hopes Austin musicians can help drum up fan interest in the men's and women's basketball teams. "We thought the way to get students to come to basketball would be if we could somehow associate basketball with something they consider to be cool, and the obvious thing here would be music," says Assistant Athletics Director for Marketing Teri Pierce. "Also, the music school is right down the street." This season, musicians sit in with the Longhorn band during men's games and perform postgame concerts at women's, and several others (Roky Erickson, Gary Clark Jr., Ray Benson) recently recorded "Rock the Drum," written by local jazz musician and UT assistant music professor John Mills, which UT will use both at games and in ads next year. Pierce says so far it's been a harmonious relationship: "The musicians love it. Sara Hickman and Ruthie Foster were just thrilled."

The Dixie Chicks won everything that wasn't nailed down at last Sunday's Grammy Awards in Los Angeles; Taking the Long Way and "Not Ready to Make Nice" made them the first artists to sweep Record of the Year, Song of the Year, and Album of the Year since Eric Clapton in 1993. Texans David Grissom, Charlie Robison (hugging wife Emily), and Ray Benson all got national face time, but the night's real winner was former Texas Playboys fiddler Johnny Gimble, whose 82-year-old heart somehow withstood the flirtations of smokin' Oklahoma siren Carrie Underwood during Bob Wills tribute "San Antonio Rose." Accepting her Best New Artist award, Underwood likewise flustered presenter and Lifetime Achievement honoree Ornette Coleman. Across the country, Emo's, I Love You but I've Chosen Darkness, Voxtrot, the Black Angels, the Sword, Alejandro Escovedo, and the Austin City Limits Music Festival were all shut out at the "Indie Grammys" (NYC's Plug Awards), but South by Southwest took home Best Festival. Speaking of... 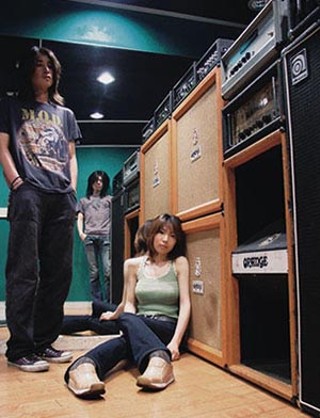 The SXSW band list is slowly sinking in. Sure, there's the usual crop of indie stars (Faint, Dears, Emily Haines) and UK buzz bands (Horrors, Errors, Cinematics), but it's equally heavy on blasts from the past, in the form of broken-up local bands (River City Rapists, Chumps, Yuppie Pricks), bygone college rockers (Cracker, Buffalo Tom), fallen Nashville stars (Tracy Byrd, Tracy Lawrence), and people nobody knew were still alive (Charlie Louvin, Eddie Floyd). Hide the Stevie Ray Vaughan memorabilia, because the Icarus Line is coming back, and APD is already on standby for the Ozomatli/Public Enemy free show at Auditorium Shores – not because they're worried about the Latino hip-hoppers starting another riot, but to protect Flavor Flav from the legion of female admirers wanting to co-star in his next VH1 reality show. SXSW will announce where to buy wristbands sometime this month, but only through its SMS messaging service; sign up at SXSW.com.

Ladies and gentlemen, the lineup for the 2006/2007 Austin Music Awards, Wednesday, March 14 in the Austin Convention Center's Ballroom A: Bobby Whitlock, CoCo Carmel, and Stephen Bruton; Barbara Kooyman & the Unstrung Heroes of TexAmericana with Carrie Rodriguez; Ian McLagan & the Bump Band; Tex Mex Experience with Texas Tornadoes and Sam the Sham; and a "Six Strings Down" Clifford Antone tribute with Derek O'Brien, Gary Clark Jr., and more. Have a good thought for Bruton, who friends say is battling throat cancer and seeking treatment at Houston's M.D. Anderson hospital but will keep what Resentments gigs he can.

Be careful out there: An unidentified woman was taken to Brackenridge Hospital around 2am Friday after stepping off the curb near Plush and being hit by a car. About 24 hours later, Nidge Miller, frontman and guitarist for legendary UK hardcore group Blitz, was struck and killed by a car while crossing the I-35 feeder road after the band's Emo's show.

Former Sex Pistols and PiL frontman John Lydon, aka Johnny Rotten, judged the Bodog Battle of the Bands contest, an upcoming reality show/tour wherein one band is eliminated in each city, at La Zona Rosa last Friday. (No Austin acts competed.) Lydon also surfaced at Fadó Sunday morning to watch soccer and rugby. "At one point Johnny pulled a silk Union Jack handkerchief out of his pocket and blew his nose," relays a TCB spy. "This got the crowd really excited."