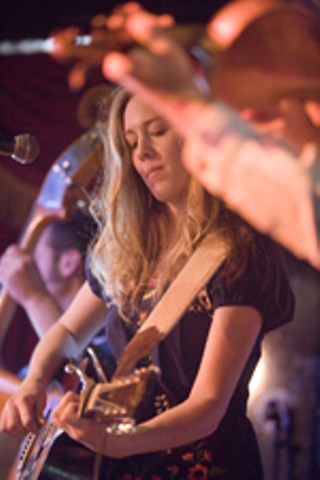 Preachin' love for the Louvin Brothers as much as the Lord, Brennen Leigh gave both ample voice and praise Sunday morning at Threadgill's. The soft-eyed, simply spoken local songstress took the stage late for the 204th Kick-Butt Gospel Brunch down on the Riverside but promptly transformed the tavern to tabernacle with a rollicking declaration of "Old Camp Meeting Time." Traditional tunes were primarily on order from the quartet – piano, fiddle, stand-up bass, and Leigh on acoustic guitar – handing down the gospel according to Hank, Roy Acuff, and Mother Maybelle, though Billy Joe Shaver's "I'm Just an Old Chunk of Coal" roused the congregational spirits to their loftiest level. The plaintive fiddle on "When They Ring Those Golden Bells" and "Kneeling Drunkard's Plea" helped wash away Saturday night's sins over migas, while the Tanya Tucker-tinged twang of Leigh's voice was enough to melt the butter on your biscuits. Although her country croon belies her Minnesota upbringing, Leigh seems equally at home in the West Texas hills or Blue Ridge back-holler, delivering "Peace in the Valley" with a down-home conviction. Joined by Maria Mabra for the start of the second set, harmonies swelled "In the Sweet By and By" and "I'll Fly Away," while a sublime "I Am Weary, Let Me Rest" proved inspired. As Leigh insisted, "This is gospel, not a funeral," and she kept faith by leading the band into honky-tonked hymns of "I Saw the Light" and "Swing Low Sweet Chariot." If there's any truth to the title of Leigh's latest album, Devil's on My Trail, then he's got one tough row to hoe.