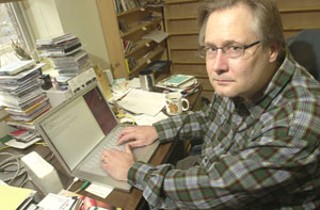 “We are not a consumer event. It’s not that I’m insensitive to music fans – obviously that’s why this all works – but ... our take on it is very different than the people who do Coachella or Bonnaroo.” (Photo By John Anderson)

The Waiting Is The Hardest Part

Blogs are no laughing matter, nor mere entertainment. Just ask Clap Your Hands Say Yeah: A rave review on Gorilla vs. Bear, Largehearted Boy, Stereogum, My Old Kentucky Blog, or a jillion others is tons better than a similar notice in Spin and/or Rolling Stone. Unlike weekly or monthly publications, they can pass along juicy bits of news and gossip instantaneously. More and more, bloggers set the cultural agenda while more traditional media outlets struggle to catch up; not coincidentally, the Chronicle's first wave of music blogs debuts Friday. Casual readers may not care, but blogs aren't the least bit obligated to check their sources. That's half their appeal in the first place.

Recently no music-related topic has been more digitally debated than SXSW's decision to withhold its 2007 band list, previously announced in early January, until Valentine's Day or later in order to limit rivals' access to its 1,300-band-deep talent pool. Sites like Austinist.com, DoneWaiting.com, and Brooklyn Vegan have taken it upon themselves to reveal as many as possible, mostly through checking MySpace pages, inching toward 400 at last count. Last Thursday MTV News published a report based partly around a rumor that Nirvana was reuniting with Ben Kweller standing in for Kurt Cobain (www.mtv.com/news/articles/1550622/20070123/story.jhtml). Shoot, TCB e-mailed Guns n' Roses' label with a "rumor" that SXSW would bring Chinese Democracy's live debut to no avail.

It's crunch time, though, and SXSW Music Creative Director Brent Grulke admits as much. "I'm getting a degree of nervousness from the industry now," says Grulke, just back from international music-biz bazaar MIDEM in Cannes, France. "It's like, 'Come on guys, we've gotta get our promotional campaign under way!'" Indeed, new Gorillaz/Clash/Verve mash-up The Good, the Bad, & the Queen, solo Stroke Albert Hammond Jr., and indie powerhouse Merge Records, to name but three SXSWers, already have.

TCB: What's your take on the MTV story?

Brent Grulke: Like I was telling [the reporter], on one hand it's very flattering that people are so interested, but on the other, we are not a consumer event. It's not that I'm insensitive to music fans – obviously that's why this all works – but we're not trying to create an event where we're trying to get music fans to come, so our take on it is very different than the people who do Coachella or Bonnaroo.

TCB: You don't feel like your feet are being held to the fire? 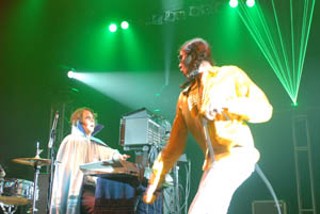 BG: No. No matter what decisions we make at this point, they're going to have good and bad effects for us and the artists and businesses coming to South by Southwest.

TCB: Is the increased attention good for South by Southwest or just annoying?

BG: It's nice to know that so many people know of South by Southwest. That absolutely has real value. At the same time, we're an industry event, so our primary energies go into trying to figure out how best to create an industry event. All that speculation is, to some degree, a reflection of the success we've had, so it's not really a surprise, and I can't really get down on it at all. It really is just speculation; some of it's accurate and some of it's idiotic.

BG: I haven't recently. I don't have time.

TCB: How close is South by Southwest to releasing their list?

The Good, the Bad, and the Queen

BG: I don't know yet. Since I got back, we haven't had a chance to discuss when that date might be. It will have to be very soon, obviously. It seems likely it'll be sometime before Valentine's Day, but precisely when I don't know.

TCB: What are some of the factors behind holding it?

BG: The largest thing is we're not trying to promote to consumers at all, and we want to be able to put out an accurate list. Once we put any kind of list out, we get all kinds of demand for it, people trying to figure out, "Oh, I need to get there; I need to get to this venue." We also get artists saying, "Oh my God, how can you have us competing with this, competing with that?"

Instead of releasing acts piecemeal, it makes more sense to get as good a sense as we can of all the acts we want to invite and put together a schedule that makes the most sense, we believe, for the largest number of people attending. The thinking was that it didn't do us any great favors having this information available earlier, because it creates this huge, huge, huge consumer buzz, and then we'll get so many phone calls of people saying, "Can I get tickets to the Stooges?" These things take up a tremendous amount of our energy and resources.

TCB: Do you think part of what's fueling all this is a misconception that South by Southwest is for fans?

BG: I don't think that's really it. Music fans, God bless 'em, know that traditionally they've been able to go to SXSW shows, and they're not interested in whether it's an industry event or not. Particularly the most hardcore, they just want to know who's playing so they can decide whether or not it makes sense for them to even try to come. 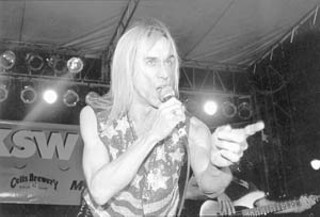 BG: Exactly. Exactly. Sure. Of course.

TCB: Do the clubs know who they've got yet?

BG: We're still ironing that out. When I was gone, everybody started putting together a first draft of the schedule. Realistically, we probably have a good sense of about 75 percent, maybe 85 percent. We have a pretty good sense of the label nights and a lot of the bigger acts, and we have working shows for a lot of the other stuff. Even once we do release it and say, "Hey, this is it," it changes radically.

TCB: So bands may know they're in but not where or when they're playing.

BG: That was the biggest question I got at MIDEM, far and away: "Please let me know what day and where." [I said,] "Believe me, I'd like to, as soon as I can." For it to make the most sense, you want to know everybody you're going to invite and then work from there. Maybe even toward the end of this week we'll send artists at least a tentative date and time, and some have already received those, at least verbally. Even some of the smaller acts, we'll say, "Look, if you're only available this day, you need to let us know, but that might put you in a position where you won't have nearly as good a show, or we may have to come to you and say, 'Hey look, we couldn't find anything for you.'" Once they get back to us, a lot of them are going to say, "I can't play that day," or, "We share a bass player with another band playing at the same time," and we'll have to reshuffle it. Following that, we should be in a position to release some kind of a list that will bear at least a substantial resemblance to reality.

TCB: It's always interesting, but especially this year because it all seems like a tempest in a teapot.

BG: My reaction exactly. It's like, "Huh? What's the big deal?" The shows are going to be as strong as they've ever been. The names we've already released [Pete Townshend, the Stooges, Ghostland Observatory] have obviously been substantial, and the artists and the people for whom South by Southwest is really created are either coming or not at this point anyway.

SXSW, Brent Grulke, Austinist, The Good, The Bad, and The Queen, MTV News