The World Is Yours, the Money's Mine 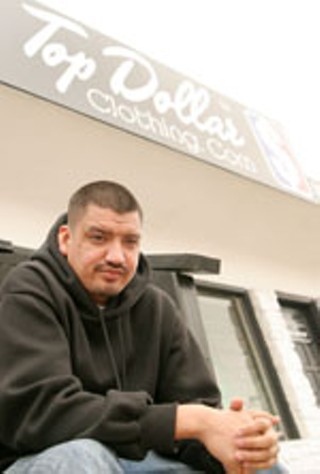 Without homegrown entrepreneurs, Texas rap never would have been able to brand itself to the nation at large. Without J. Prince backing the Geto Boys or DJ Screw selling gray tapes, Chamillionaire wouldn't currently be nominated for two Grammys. It takes a solid business plan to make much of a mark away from home.

Here in Austin, Carlos Hernandez, aka Top Dollar, piles worthwhile business ventures in fat stacks as a T-shirt designer, clothing-store owner, record-label executive, marketing consultant, and photographer. The Johnston High School product hit it big when his Whut It Dew T-shirt design surfed an international crest created by the "Still Tippin'" explosion of '03-'04. As the world responded by setting its lusty gaze and then clammy paws on all things Texas rap, Top Dollar made sure he was right there with a booth and a cash register.

Joining forces with DJ Rapid Ric to sponsor the Whut It Dew series of mix discs makes Hernandez look like a gifted talent scout. Having his Screwed Up Click shirts worn by Z-Ro and Trae in the "Let Me Live" video lends credibility that only a longtime Screwhead could muster. Hearing J-Kapone, Top Dollar Records' marquee act, catching spins on FM radio paints the focused father, known to his friends as 'Los, as a guiding light. Even then, however, it's the opening of the Top Dollar clothing store at 1197 Airport that poses itself as Hernandez's latest and greatest business accomplishment.

In addition to an array of many by-now infamous T-shirt designs, including the Eat Grind Sleep classic, Top Dollar churns out ATX hood-specific T-shirts in representation of the 0-2, Montopolis, Dove Springs, etc. A visit to the boutique reveals that Hernandez also knows his way around cameras as evidenced by CD covers that he's shot as well as a Top Dollar Music Videos Vol. 100 DVD for sale.