Hip-hop ontology in the 0-2

Tweet
print
write a letter
"The Temporary Autonomous Zone is utopian in the sense that it envisions an intensification of everyday life." – Hakim Bey

Just off the intersection of East Ninth Street and Prospect Avenue, a trio of peach-fuzzed teenagers inhabits a beat-up and abandoned Chevy Nova. Sealed within the motorless automobile, suffocating marijuana smoke replaces the brisk winter air. Quarantined from the city streets that surround them, the huddled young men pound furious rhythms on the dashboard and side panels of the disabled vehicle. With a notebook and pencil passed between them, volcanic raps pour from the hearts of three childhood friends caught up in a moment of socio-artistic magnitude.

Little did aspiring local rappers Ryno, K. Paul, and Pimpin' Pen realize all those years ago that their clandestine freestyling approximates what cyberpunk author Hakim Bey first described in 1985 as a "Temporary Autonomous Zone." Without the presence of cops to arrest them for smoking, nor teachers insisting they pipe down, these three ambitious lyricists afforded themselves the most practical of private/public spaces as a safe harbor for the development of their art. When the Nova was hauled away and replaced with the shell of a gutted Cadillac, the trio's self-contained "pirate utopia" followed suit. Coded by a language beneath the radar of a disapproving dominant culture, Bey's "guerilla ontology" comes to life as the hip-hop signature of this garbage-strewn, Central East Austin block. "Ryno grew up two doors down from me in what we call the Ninth Ward," recalls Pimpin' Pen. "And since K. Paul is my first cousin, he was always at my place as well. When my family moved out of the house to another part of Austin, I stuck around for a while, basically squatting in the house."

Knee-deep in a neighborhood environment of rampant drug-trafficking, the oft-truant teenagers adopted the requisite degrees of "territorial gangsterism" necessary to ensure survival. For Ryno, the tricks of street trade came naturally, as his song "Kornablock Hustla" so poignantly illustrates:

"In time, I knew I'd grow to be a hustler. My brother was a hustler, my cousin was a hustler, fuck, my mother was a hustler, generations of game running all through my veins. So subject to hit a stang from out the household I came, momma left me in the house, I ain't even know how to slang crack, but still I made a whole stack before she came back."

"Not to take away from places like the 2-3 and 2-4 that are a little more suburban, but where we're from, it's obviously the gutter part of town," he nods. "There's always a commotion, from fights to police sirens to gunshots. There are certain times where if you're not from around Chicon, you better not be caught walking up Chicon. My grandma hated to have to drop me off at my mama's house." 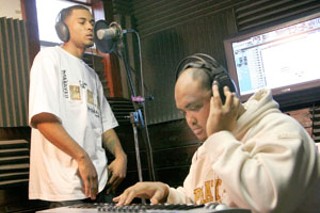 In communities suffering from poverty and neglect, role models emerge from a compromised reality. On the 02 Block Edition, the track "East Austin" plays out as Black Mike, a rapper/producer raised in ATX's Elm Ridge project, pays tribute to a peer most often identified as this neighborhood's "big tookie."

"It was a dude named Byron who drove a Lac. He had red rags hanging out the front and back, and I was so fascinated by that. He told me the rules to what I was supposed to do. He said rep your ZIP code and mine was 0-2. I really looked up to Byron like damn, he that dude, so when Byron got killed a part of me went too."

MC Fatal carries the burden of having been incarcerated when his brother Byron was murdered in '95. Fatal's gruff voice reveals the wear of a ruminating grind, forever trying to revisit, revise, and reincarnate. "It started at an ESG concert where Byron got into it with this guy who'd been fooling around onstage," he explains. "Afterwards, the guy got his Crip friends, and later that night they caught Byron right in front of Sam's."

While tragedy and hardship haunt the 0-2, Central East Austin residents maintain a historical inclination to channel their hurt into moving gestures. The blues tradition that greater Austin takes such great publicized pride in owes its very breath to the Victory Grill on East 11th Street. Guitarist T.D. Bell & the Cadillacs served as backing band for many of the touring R&B headliners to come through Austin during the 1950s. Beyond gripping performances, the Victory Grill also supplied comfort food and respite for both locals and African-American soldiers stationed at Fort Hood. The nightclub's double duty as town hall for those typically spurned by white culture paints the Victory Grill as a shining example of a fully operational Temporary Autonomous Zone.

When 0-2 rapper NOOK teamed with KAZI-FM champion Dorothy Turner in '97 to begin throwing free concerts in Rosewood Park, the social services aspect of the monthly gatherings helped build alliances between street-oriented artists and activists. An accessible and forthcoming mentor for area youth, NOOK recognizes the patience and understanding it takes to live up to his name, an acronym for Never Outcasting Our Kind. Taking a page from NOOK's persistent philanthropy, Black Mike organized a motivational presentation this past December for the kids at the Austin Can! Academy. Artists including Chingo Bling, Chalie Boy, Rapid Ric, and Mr. Blakes offered students their best suggestions on fulfilling one's true potential. In fact, the latter half of '06 found the 0-2 fulfilling its own potential as a source of some of the most powerful rap music to emerge from these Austin city limits. Upon completing 18 months served between them in county lockup, Pimpin' Pen and K. Paul of VIP cut right to the chase as their Welcome to tha Ground Under mix CD ("Texas Platters," October 27, 2006) scorched an already-blazed local hip-hop landscape. Much to do with Austin rap has changed since the last week of '99 when VIP found itself holding down each of the top three spots on KAZI's Top 30 countdown. Nowadays, the local competition isn't so scarce, and when VIP's "Whoop" garnered considerable radio play last year, it was often paired with fellow River City products including J-Kapone's "Watch My 15's Stutter" and KJ Hines' "Capital City."

What K. Paul readily refers to as a "movement" consists of a tight-knit network of local rappers looking out for one another. When VIP commandeered the opportunity last fall to support Houston's Trae and Paul Wall across Texas, they brought local artists Basswood Lane, DJ Grip, and Will Hustle along for the ride. VIP's current mix CD, Block Movement Vol. 1 Everythang Must Go, bends East Austin corners with the rolling flows of Ryno, Gerald G, Black Mike, and MC Fatal all vying for shotgun seating. The last song on the disc, Ryno's "East Side 02," saddles up to a wicked Sic Vic instrumental and authoritatively scuffs its territory with lyrical tread marks.

"This where I used to go to church as a li'l nigga, this where I did dirt when I was a li'l bigger – the very spot where I was bred, raised by the block, that's where my daddy stayed, never seen my fuckin' pops. This the hood that never cease trying to stack a knot, three in the morning posting at that million dollar spot."

A similar sweet spot, Ryno's '06 release They Call Me 'No, remains a beacon for what it should sound like when a local rapper puts his mind and entire being into a completed artistic statement.

"I grew up listening to Street Military and the South Park Coalition," Ryno informs. "And with my solo project, I wanted to bring back what it was like to hear a real album that shows the many sides of an artist."

Over the course of 13 tracks, They Call Me 'No captures an impressively sweeping range of varied style and perspective. With production duties shared between On the Line Records founder Triple D and Sic Vic, Ryno covers emotional ground like the miraculous birth of his daughter just as effectively as he cements his disdain for fake gangstas and snitches. At times playful and lighthearted, They Call Me 'No represents an honest and accurate depiction of the day-to-day life of an 0-2 street hustler. Before striking out on his own, Ryno shared mic duties in a group with Gerald G, aka Geezy.

"No one ever wants to believe me when I tell them this," Ryno relates, "but I remember a night a few years back when I witnessed Geezy freestyle for about five hours straight. From 2:30 in the morning until about 7:30, he was absolutely on fire, hitting up classic topics like it was nobody's business." 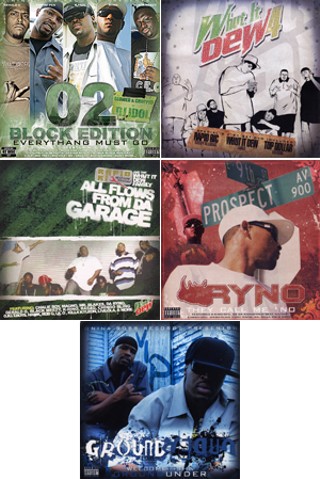 "This is how I do it 'til the day a nigga die, ho, in the kitchen steady flipping like Pablo. I'm eating nice, but I'm really trying to grind, yo, because this rap shit ain't nothing but a sideshow. Keep the block hot and pop it like the laws do, playing mind games with haters like Sun Tzu."

Sleep for one second, and you've missed it.

Forever Johnny-on-the-spot, Austin's Rapid Ric caught wind of Gerald G's genius a full 10 seconds before offering him a seat on the Whut It Dew Family couch ("Whut It Dew," May 20, 2005). Along with Geezy came Black Mike, and together the duo laced Ric's Whut It Dew 4 mix with clinically ridiculous "yabba yabba doo" cadences on top of wrecking Ric's DJ Screw-inspired All Flows From da Garage.

"There's definitely been advantages to situating my studio here on Chestnut Avenue," boasts the Mixtape Mechanic, Ric, out punctuating overseas tours backing Houstonians Chamillionaire and Devin by exposing talent from his back yard. Bassist D-Madness ("D-Madness," March 3, 2006) adds to an astounding list of artists recruited by Ric for what's turning out to be a "psychobetabuckdown" of a forthcoming Whut It Dew Family album.

Go ahead and identify Rapid Ric's garage as yet another 0-2 Temporary Autonomous Zone. As Hakim Bey pontificates, "The TAZ exists not only beyond control but also beyond definition, beyond gazing and naming as acts of enslaving, beyond the understanding of the state, beyond the state's ability to see." With mixtape sellers such as Atlanta's DJ Drama now being treated as public enemy No. 1, the underground rap game necessitates a certain degree of invisibility. Elusive hip-hop maneuvers by way of coded language, a free exchange of ideas, and digital refurbishing create scenarios that the suits find extremely difficult to fathom, let alone regulate and tax.

Before we get carried away with any middle-class-derived projections of organized defiance, however, we should acknowledge that 0-2 rappers are really just creating enough free space for themselves to breathe comfortably. For the time being, that may only entail a mix CD in the abstract or even just a place to smoke weed and freestyle in the flesh. Ultimately, the quest entails attracting enough attention to 0-2 rap that eventually the proverbial mix CD turns into a homestead paid in full along with the freedom that financial security offers.

After all, what would the birthing of a Temporary Autonomous Zone be good for if not to help people achieve their very own self-defined concepts of success? Summing up the force that drives his neighborhood cohorts to set their rap sights high, K. Paul bluntly states the obvious.

"Our work ethic is insane."