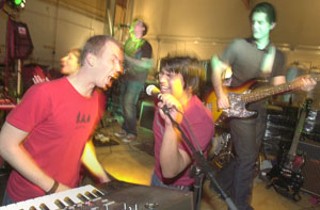 It was, as Clap! Clap! singer Joshua Mills put it, like a deleted scene from Strange Brew. With the crowd quickly swelling for Saturday evening's show at the Independence Brewery, Austin's foundational axiom was proved once again: People will come out on a night straight out of a Wes Craven flick if there's free beer. In a red cape and T-shirt that read "Mr. Wonderful," Foot Foot singer/guitarist Bryan Lawhorn led the local act through a varied collection of songs from their latest ("Texas Platters," July 7, 2006), an improv reggae jam about bowel movements (the word "Evacuate!" has never seemed so powerful), a cover of the Cars' "Just What I Needed," and a freestyle rap about beer that turned into the rap at the end of Revenge of the Nerds. Taking a break from recording their debut LP, Austin eightpiece Clap! Clap! – padded with two full-time clappers, dueling synths, and a four-four disco-punk beat that, unfortunately, cannot be uttered without visions of the Rapture – played to a packed brew house, the line for free beer fusing into the bathroom line at one point during their set. Sure, they sound like a dozen other bands right now, half of them with the word "clap" also in their name, but Clap! Clap! seriously, not ironically, loves the Eighties, just like the VH1 show. When the majority of your crowd has broken into a spontaneous clap/clap/dance sequence, you can forgive a few overused New Wave basslines. Yes, it was a little like Strange Brew, if John Hughes had directed it.