It's not hard for Melissa Joulwan (pictured) to explain Roller Derby's popularity. "It's good-looking women knocking each other around," she says. "It started as a way to dress up, get a little exercise, and have fun beating each other up." It's come a long way since then, a journey Joulwan – Melicious to Texas Rollergirls skaters and fans – documents in her book Rollergirl: Totally True Tales From the Track (Simon & Schuster), on shelves Feb. 6. Loaded with profiles (she interviewed hundreds of Rollergirls) and dramatic moments, such as the 2003 split into two leagues and last year's first-ever flat-track national championship (which the TXRG squad won), the book, like Roller Derby itself, is rooted in the local music scene. "It's a huge part of what we do," says Melicious, herself bassist for Peter Elliott & the Sellouts. "Having live music [at the bouts] really creates the kind of energy we want to have when we start. Austin is such a live-music town, it seemed like a no-brainer to have music be part of it." The Rollergirls invade BookPeople Feb. 20 to celebrate the book's release, and after a two-week tour of the frigid Midwest, Melicious will be back in time for the upcoming season, which begins March 5. A proud member of the Hotrod Honeys, she says three-time defending champions the Honky-Tonk Heartbreakers are ripe for a fall. "We've come close the past two years, and the girls have got a fire under their butts." Check out an expanded version of TCB's interview on the Chronicle's sports blog.

Eastside record shop Snake Eyes Vinyl owner Rebecca Hubinsky has started a petition she hopes will get her neighbor, the owner of Mexican restaurant De las Casas, to subscribe to some neighborly charity. Snake Eyes only has three spaces in the lot it shares with De las Casas, and in the past few weeks, several customers have been towed for parking in spaces designated for restaurant use, but poorly marked. Snake Eyes customers and patrons of its frequent in-stores (the next is Feb. 2 with Bloodhorse, Ballgag, and Beautiful Lotus) have even been towed while the restaurant is closed, and Hubinsky's attempts to work out a solution have so far fallen on deaf ears. "He won't even talk to me," she says. So far she's collected about 300 signatures but would like more by the time both businesses meet with their landlord early next month. Sign the petition electronically by e-mailing snakeeyesvinyl512@yahoo.com or with an old-fashioned ink pen at 1211 E. Seventh. 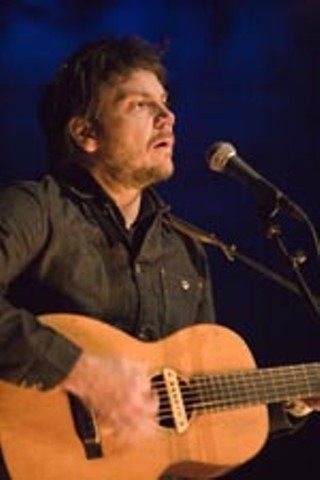 Pour Some Tweedy On Me

"You guys have seen the DVD, haven't you?" Unfortunately, but Jeff Tweedy wouldn't be half as entertaining if they hadn't. At Tuesday's sold-out Hogg Auditorium solo show, the first of two, the Wilco frontman parried those hoping to goad him into a reprise of his Sunken Treasure meltdown and left everyone else in stitches several times. His "Jeff Leppard" story was the best, but Tweedy's endearing awkwardness isn't nearly as lighthearted in song. He was all smiles (mostly) by the singalong encore ("Theologians," "Gun," "Dreamer in My Dreams"), but the hourlong main set was more "Black Eye," forlorn narratives from voices as bruised on the inside as out.

Whatever their other faults, Republicans can be pretty damn entertaining sometimes. Texas Gov. Rick Perry, re-elected with a less-than-resounding 40% of the popular vote in November, personally asked hunting buddy Ted Nugent to play his inaugural ball at the Austin Convention Center last Tuesday night. The Motor City Madman, who has a ranch near George W. Bush's Crawford compound, repaid him by wearing a cutoff Confederate-flag T-shirt and unleashing an expletive-laced diatribe against, among other things, illegal immigrants and "faggots getting hitched." (Nugent was banned from Houston's Cynthia Woods Mitchell Pavilion for a similar rant in 2001.) Austin's annual ice storm delayed the story from hitting the wire services until last weekend, but blogs from PinkDome to the Huffington Post have been chuckling ever since. Perry's staff has downplayed Nugent's antics, which also included machine-gun props and a video of "Frank the Bear" getting blown away, but even some Republicans were appalled. "I think it was a horrible choice," GOP strategist Royal Masset told the Associated Press. Perry hasn't exactly apologized; according to Nugent's interview with the Fort Worth Star-Telegram Monday, Perry called him and said his detractors could "drop dead." Still, some pundits think Nugent may have torpedoed his pal's chances of being the 2008 GOP vice-presidental candidate, but let's be honest, America has probably had enough folksy, trigger-happy Texans holding national office for a while. Nugent's performance isn't available on YouTube, either because most people went home after sets by Mary Wilson and Clay Walker – with whom Perry duetted on "Sweet Home Alabama" – or because camera-phone technology is still too sophisticated for most of Nugent's fans (and TCB himself).

The Commandoes at the Second Juvenile Deliquency Film Fest at Liberty Lunch (sponsored by the Chronicle), July 31, 1983 (Photo By Martha Grenon)

• Gerry "Phareaux" Felton, a guitarist whom Stevie Ray Vaughan once asked to be in an early version of Double Trouble, died Sunday from complications following a heart attack in Albuquerque, N.M. Felton was born in Hattiesburg, Miss., and moved to Austin in the early Eighties. He was an original member of Omar & the Howlers, appeared on the Big Guitars From Texas, Volume 2 compilation, and played with the Commandoes until moving to New Mexico in the early Nineties. Felton is survived by wife Linda; funeral services are Friday in Albuquerque.

• Tickets go on sale Saturday for the 2007 Coachella music festival, good news for Jesus & Mary Chain, Happy Mondays, and Rage Against the Machine fans; all three reconstituted groups are on the docket. This year's Texan delegation is Roky Erickson & the Explosives, playing April 28, and Explosions in the Sky and Willie Nelson April 29. The next weekend, Nelson returns to Indio, Calif.'s Empire Polo Grounds for Coachella's Stagecoach country cousin alongside George Strait, Lucinda Williams, Pat Green, Robert Earl Keen, Drive-by Truckers, and the Flatlanders, to name but a few.

• Still no official band list, but the tide of SXSW rumors on the Internet continues unabated. This week's crop includes Morrissey, Daniel Johnston, Chavez, Imperial Teen, Andrew W.K., Midlake, John Digweed, Tom Morello, and a reunion even cooler than the ones at Coachella: Bob Odenkirk and David Cross of HBO's seminal Mr. Show. On better authority comes word that Yoko Ono will headline Astralwerks' SXSW showcase, which includes Sparklehorse, Little Ones, Sondre Lerche, and Small Sins. Not coincidentally, perhaps, Sean Lennon will also be at the musical festival this year. On a final reunion note, those who missed Cris Kirkwood's local return to the Meat Puppets fold during their surprise set at La Zona Rosa last Saturday (opening for Army of Anyone) just may get a second chance come St. Patrick's Day.

• Oops: TCB reported last week the projected completion date of the Austin Music Hall renovation as June 2008, but it's actually June 2007. Sorry about that. And this week is your last chance to vote in the Austin Music Poll (p.3), so hop to it.