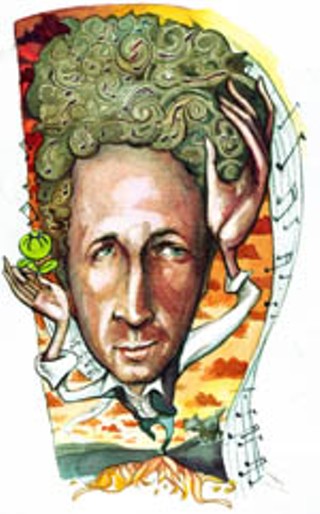 "I don't know what 'genius' even means," shrugs Buckingham. "It's just a matter of keeping your eye on the ball. You just get out there and be what you want to be. That's part of evolving and part of staying true to yourself – part of remaining alive in a real authentic, long-term sense creatively: not listening to what other people tell you to be."

If the spastic quirk of Tusk didn't prove Buckingham's musical iconoclasm, his four solo albums have. Under the Skin, his first since 1992's brilliant Out of the Cradle, strips back the bark of '81's Law and Order and the mad bite of '84's Go Insane for the familial peace of Buckingham's newfound domesticity. Skin fits the Mac frontman like the label he's always transcended: singer-songwriter.

"That's one of the real downfalls of celebrity," he says. "You're something that's about you at some point, and that gets latched onto and pumped into the machinery. Then you start having a million other people telling you who you are, and what you should be doing and why, and it's easy to lose your way. So over a 30-year period, I've tried to maintain my individuality – even if it puts me in the position of being the Terrence Malick of rock."

Austin Chronicle: You've always been an autobiographical songwriter, but the new album is nakedly so. What do you attribute that to – your new family life?

Lindsey Buckingham: It's funny. As autobiographical as say the stuff on Rumours was, I don't think we thought of it as such when we were writing it. Obviously we knew we weren't happy and that we were going through all this personal turmoil, but I remember thinking at the time that we were just writing generic pop songs. I'm sure Carole King was writing lyrics to Gerry Goffin, but it seemed generic.

But there's something about this grouping of tunes. I don't know if it's that I've gotten married and had three children. I can't put it down to any one thing. I don't know if it's because the material is presented in a much more pared-down way. I think both those things enter into it. I think I've gotten slightly more skillful as a lyricist. I've had certain questions answered that were hanging out there for a long time, you know, in a post-Fleetwood Mac environment where maybe I was on track creatively, but there was a lot of stuff on a personal and emotional level that's now been put to rest.

AC: On Skin's "Show You How," there's the line, "I'm a madman out on a bad man route." Later, in "Shut Us Down," you say, "Long ago I lost my mind." Then there's Go Insane. Have you ever had serious doubts about your sanity?

LB: [Deadpan] Oh, never. No, not for a minute. But isn't that the mark of an insane person? [Laughs] So who's to say?

AC: Was insanity part of the bubble of fame, or is that something inherent to you?

LB: Even when I was 8 years old, I was way outside the box of the family. Not that I was any sort of freaky rebel. I was a completely integrated family member. But then there I was in my brother's room two hours a day listening to his 45s. So it's always been there on some level. Now that I'm a parent, I can imagine my mom and dad back then thinking, "Gee, what's wrong with Lindsey?"

Cut later to Fleetwood Mac, and you have a situation that's a large, extended family; a huge, huge machine in which I had a certain ambivalence playing the part that I played initially. Like I had to pare down my guitar style because I had to be a team player and work with what already existed. There was a lot to adapt to. Then, even after Tusk, which was probably my happiest moment, there was this sense that we couldn't continue with that because of the perceived lack of commerce.

So I've always been this guy who's wanting to present himself the way he feels and having that be perceived as slightly aberrant, as they say. Then, over a period of time, your own stridency to maintain that can make you not necessarily mad as in insane, but it can certainly make you mad.

AC: How much is writing songs a process of self-discovery for you?

LB: You don't do it with every song, and it doesn't necessarily have to do with the lyric, either. It certainly does on many occasions on Under the Skin, but it probably can have more to do with what you've arrived at musically. Obviously to go from Rumours to Tusk was a great experience of self-discovery for me. Had there been no arbitrary political limitation from the band that we weren't going to do that anymore, I probably would never have made solo albums. I wouldn't have had to. You're lucky to have profound self-discovery through a group of tunes a few times in a career, I would think.

AC: History has proved you right on Tusk.

LB: On that and a few other things. It's gratifying when I've heard Mick [Fleetwood] say it – and I've even heard Stevie [Nicks] say it – that Tusk is their favorite album now. In general what's happened is that, yes, the music has stood the test of time in a way that's borne it out properly. There's a critical mass of understanding of why it was made and that there's an idealism to it, that it was saying, "We're not a big machine."

AC: Have you heard Camper Van Beethoven's cover of Tusk?

LB: I have. [Laughs] I loved it. They took some of the songs to such different places [still laughing]. I thought, "Wow, where did they come up with that?" Just the fact that a group of guys would sit around and want to remake a whole album like that. That was just a trip, I have to say. I loved it.

AC: Listening to the Dixie Chicks' version of "Landslide" recently, I wondered: People think of Stevie Nicks when they hear that song, but you produced it and probably arranged it. Do you feel any sense of propriety when you hear it today?

LB: Oh, not really. That has a lot of background to it, that song. That was when we first joined Fleetwood Mac. Even the guitar part; it's got a nice little solo on it, but it's not a signature guitar piece per se. I don't think of myself too much in that. That was a Stevie thing. It's a beautiful song. It did deal with some problems that she and I were having at the time. If anything, I think about that. I think of it as one of the group of tunes at the very beginning.

AC: You're known as a pop songwriter in a pop group, but with a guitar solo like the one on Mac's "I'm So Afraid," one thinks, "This guy could play all night."

LB: [Laughs] I would if they let me! Right now I'm playing some rocky songs at the end of this tour's set. The first three-quarters of the show are mellower – we're trying to maintain an overall tone of what this album is – but then it starts to come unleashed. In a more general sense, if you go back to the last Fleetwood Mac tour, I'm enjoying myself more than I ever have as a guitarist and as a performer in general, because, as much as we miss Christine [McVie] being there, her absence has created more space for me to be a guy. Stevie's got her thing that she does up there, but when it comes time for me to do what I do, I've got more space instrumentally. It's a more guitar-oriented thing. I'm up there being a guy; there's testosterone up there. There's this whole thing that was never able to be stretched out, as you say. The eight-minute solo would've been unthinkable previously. So, I'm having a great time with the guitar right now.

AC: Do you listen to other singer-songwriters?

LB: Well, not too much. I am a singer-songwriter. I'm just trying to find things that are gonna freak me out a little bit when I hear 'em and kind of shake up my idea of the status quo. I'm more likely to be listening to a Thom Yorke album or something weird like that.

AC: Your only other solo tour swung through Austin in 1993, and you played a metal venue, the Back Room.

LB: Okay, well let's not talk about that [laughs]. I don't remember the gig, but we played some pretty, shall we say, fun places.