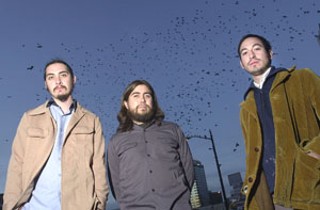 For some, a moment of realization is crystallized in a split second, by an event or conversation. For others, it's later – weeks, months, years – before the seepage occurs. A life-changing album is one of those experiences, making the gears spin backward or, in some cases, forward.

Heaven up Here captured the damp chill of Euro dreaming in the early Eighties, and there in the middle of 11 gloomy and magnificent songs was the title track, sputtering and seizing up like an epileptic. Who knew the lines "Smoking holes and we've got only dreams. And we're so damn drunk we can't see the stairs," spouted from the sugared lips of perpetually soused frontman Ian McCulloch, could be such an alien encounter, a paralysis, a bolt of blue from, well, Heaven.

Austin Chronicle: Describe your experience of Heaven up Here.

Jaime Zuverza: It was summer 1987, and my 11-year-old head got excited by a couple of Echo & the Bunnymen songs off their self-titled release. I got curious, and from the mall I unearthed Heaven up Here. I went home and put it on, and a tense guitar introduced it all. I felt my lamps get dim and the air get heavy. I felt compelled to look down the hallway and under a table or something. Then an echo-y snare reassured me that I was, indeed, soaking in something alien.

Eventually, I realized that the music wasn't coming from my speakers but was being transmitted directly into my brain. As soon as I became aware of this, I received a telepathic greeting from a voice that informed me that it was time to relinquish my mind. I became enraged, and with all my strength, I forced the beam out of my head and flung it back up to space.

The ceiling became transparent and instantly revealed the origin of the signal. The satellite and I stared into each other's eyes, and then it said, "It was a pleasure to meet you," suggesting that it was all over for me. From its metallic eye cancerous rays poured down on me like moonlight mixed with sunlight. The record continued to play, and I must say our short standoff was accompanied by a most excellent jam, but it was too intense for me, and I went out to what sounded like, "The boom-boom box says there's nothing to fear; it may be hell down there 'cause it's heaven up here."

My brains were boiling. I was out for what seemed like days, but, of course, only a short silence after the title track had passed, as if I had been recovering in another dimension, I woke up to the wobbly noise at the start of "The Disease," and I knew that it was the sound of the departing scalar wave. It was followed by a lonely guitar I found both menacing and comforting. It was then that I knew.

AC: Did it make you want to play music immediately?

JZ: When I heard the album, I got obsessed with "Heaven up Here." That drugged sensation came from not knowing what the hell was going on in the music. It seemed like they were playing it so fast, and I couldn't get a grip on it. There was no comfortable place to settle within the song and nothing to identify with. So I listened to it over and over. The toms and bass on loop and then shapeless guitars – it surely made me want to play guitar like that, but Will Sergeant played so strangely that I didn't know where to begin. Seven years later, I freaked out, joined a militant church, threw away all my evil, satanic tapes, and then finally picked up a guitar.

AC: So you related to their darker themes on some level?

JZ: At first I didn't know what McCulloch was talking about. But I think the mood of the songs conveys some of the same things the lyrics do. I think I understood most of it with my 11-year-old gut and little of it with my 11-year-old brain. I did identify with those dark themes. It's good stuff to listen to when you're an alienated preteen. In elementary and middle school, it seemed like the only people who were really into music were metalheads, so there really wasn't anyone to talk to about music even though I was excited about accidentally falling in love with the early Bunnymen records.

AC: What was it specifically about the song "Heaven up Here"? 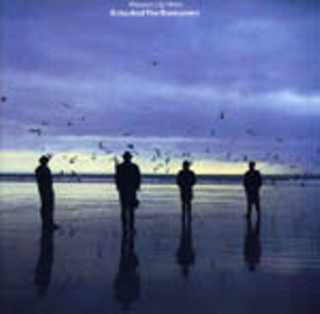 JZ: When I listen to music, I don't get it. It always goes over my head, at least 80 percent of it. There's 20 percent of a song that stays. With that song, the drums are just all over the place. It's all just coming at you.

AC: Sonic Youth's Goo was my conversion to the other side in the summer of '92. I was amazed music could sound like ... that. It was dumbfounding, and I was awestruck much like you. What impression did Heaven up Here leave on you?

JZ: I can't really associate it with one particular time or feeling. I guess it makes me feel something vague and blurry, which I suppose is another way of saying dumb and confused.

AC: Did you ever go through a goth phase?

JZ: I never went through a goth phase; I never really saw any goth people or knew about it until I was about 15. Luis and his friends were the first goth-type kids I ever saw. I would see him at school dressed in black and carrying around an umbrella even though there was no rain. He was in this band called Stillbirth. I saw them play around 1991 and was blown away. They were all 14 to 17 years old and going nuts! They were really into bands like Bauhaus.

AC: I hear in Horse + Donkey a lot of the same interlocking melody as I do with "Heaven up Here" or "With a Hip." How much did they influence you guys?

JZ: I'd definitely say that Heaven up Here is one of the things that influenced our music, but it wasn't the only thing. Music goes over my head sometimes, and I retain just a small amount. I guess it's just finally sinking in. Music's such an intuitive thing. I can't do what I want on guitar. I just do what my hands want to do. They didn't know how to play at first either; Will Sergeant would just ride up and down one string ... which is what I do. We kind of bang on the strings, and something comes out. So in that sense we're similar.

AC: Did you get into McCulloch's solo stuff?

JZ: I did. And before that it was the Smiths. And after that it was just a three-month love affair with a thousand bands. But I kept coming back to Echo & the Bunnymen.

AC: What about their later albums?

JZ: Heaven up Here's still really good. Crocodiles is really good. Porcupine's still good. Ocean Rain starts getting ehhhh. And then the self-titled's like aaagggh. I guess it happens to all great bands.

AC: Did you ever have Ian McCulloch hair?

JZ: No, I didn't have Ian McCulloch hair. My hair was going that route, but then I started skating and had a nice set of floppy bangs. Definitely more like Will Sergeant's.

AC: You were a skater then?

JZ: Not then, but like six months later, when I started listening to the Dead Kennedys.