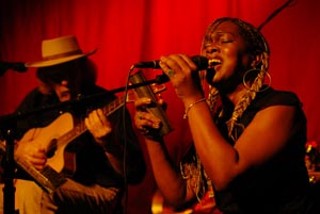 Under a full moon and with Mother Nature providing "The Rain Song," Led Zeppelin's mythos and mystique transformed Ruta Maya into L.A.'s infamous "Riot House" Wednesday night for nearly seven hours. Sixty minutes in, Jade Day got Unledded with an ace Joni Mitchell tribute on "Going to California" segueing into "Tangerine." Day and Nathan Singleton then suffered a communication breakdown on "Hey Hey What Can I Do," but LZ Love and Lightning Red reclaimed the soul of Zeppelin's borrowed blues roots hours later with "Your Time Is Gonna Come" and "Gallows Pole." Adam Farina, the night's dark-haired golden god, led the Action Is through the first two movements of Physical Graffiti, "Custard Pie" and "The Rover," before ensuring that Amplified Heat caught fire like the Hindenburg affront "How Many More Times" and "Good Times Bad Times." Golden Bear turned the "Bron-Y-Aur Stomp" into a familial affair, and the Summer Wardrobe came In Through the Out Door with "In the Evening" before frontman Jon Sanchez strapped on Jimmy Page's trademark double-neck guitar for a dead-on "The Song Remains the Same." While the concert document of the same name and the Led Zeppelin DVD served as overlapping arcs on the video screen during set changes, the songs themselves didn't always follow suit. Chili Cold Blood added a double shot of slide-guitar twang for the bassless "Heartbreaker," while Graham Reynolds finally brought the Bonzo as Golden Arm Trio transformed "Kashmir" into a free jazz free-for-all and Jason Morales spiked the hammer of the gods during Tia Carrera's menacing jam on "When the Levee Breaks." For those who made it to "Achilles Last Stand" near 2am, Ralph White's "post-apocalyptic" accordion rendition of "Stairway to Heaven" was the evening's swan song, though the piper in this case did not lead to reason.