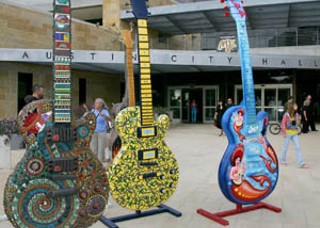 Everyone who thinks Austin takes itself a bit too seriously got plenty of ammunition last weekend, when a graphic accompanying the Nov. 25 front-page New York Times article, "Cities Compete in Hipness Battle to Attract Young," labeled Austin the "live music capital of the South." Naturally, this didn't sit too well with locals who prefer the broader, self-proclaimed, and virtually impossible to prove (or disprove) honorific "live music capital of the world." News 8 Austin was the first to pick up on the (non)story, and at Monday's press conference unveiling the supersized Gibson guitar sculptures (above) to be displayed around town and auctioned for charity, Austin Mayor Will Wynn joked to Fox 7 News about canceling his Times subscription and said, seriously, that he and Ray Benson plan to write a letter to the editor. Perhaps they weren't aware that two weeks before, in the lead Sunday Arts & Leisure article about foreign indie rock bands' double duty as government-subsidized cultural ambassadors, the first person quoted was Austinite and SXSW creative director Brent Grulke. Besides, recognition from the nation's paper of record (unless you're Bill O'Reilly) as the musical capital of a region responsible for everything from Dixieland jazz and Southern rock to Delta blues and booty rap is about as good as it gets. No one, Times or otherwise, disputes Austin as a national and even global model for converting live music into both cash and civic identity (again, above), but the more umbrage our elected officials take over such semantic trifles, the more provincial we appear. Fox 7 buried the story after a brief piece on the Kinky Friedman campaign's upcoming office-furniture fire sale, but it wouldn't die quite so easily: Wednesday, Times news blog "Lede" clucked at the "heated exegesis," whatever that means, stirred up by the paper's word choice.

Some music festivals are the product of months upon months of backbreaking legwork and meticulous planning. Others just sort of happen, as is the case with Friday's first-ever Fun Fun Fun Fest in Waterloo Park. FFFF point man and Emo's talent booker Graham Williams says it came about when acts kept contacting him for shows on Dec. 1, but Buffalo, N.Y.-born/Tampa, Fla.-raised death-metal choirboys Cannibal Corpse were already booked. So was every club to which Williams referred the bands.

"Peaches, Circle Jerks, Dead Meadow, none of them could get a show in Austin," he says. "So I decided I'm gonna put it together. It just kept getting bigger and bigger."

As it stands now, even after Calexico and Sweden's Sounds dropped out, FFFF spans three stages and 26 performers (see "Music Listings" for a full lineup and interview with a reunited, if not reformed, Negative Approach). Williams asserts there's still plenty of room for a local festival with a more underground vibe.

"I think ACL is really well-done, but it only touches on that sort of music," he says. "I don't want to make a giant festival like that, which everyone likes. I want to do one that's very specific."

FFFF's lineup was finalized in mid-October, when Williams rounded up familiar Emo's faces including Riverboat Gamblers, the Octopus Project, Lower Class Brats, Krum Bums, and the Applicators. He approached several hip-hop acts, including Aesop Rock and Atmosphere, but they were unavailable. Austin's psychedelic death-mongers the Black Angels were the last to come aboard after the Sounds rerouted their tour.

"There were tons of other locals I would have liked to have on," Williams says. "If it goes well, and I get to do it again, I'd like to include more people."

Williams enlisted Alamo Drafthouse founder Tim League, with whom he worked on last year's aborted Cinemania and the periodic Austin Fusion DJ/multimedia shows (also in Waterloo Park), to help with staffing and other logistics. With barely six weeks to assemble and promote the festival, he thinks everything has gone smoothly, including ticket sales.

"They're about what I expected," he says. "Our worst-case scenario is breaking even." With unapologetic documentary Shut Up & Sing currently at the Arbor, the Dixie Chicks' politics continue to dominate the trio's press clippings. In the meantime, the Texans have accomplished a feat almost unheard of in modern pop music: a largely successful audience transplant. By now it's clear that most of the fans alienated by Natalie Maines' March 2003 anti-George W. Bush remark aren't coming back, and mainstream country radio has long since raised a new crop of videogenic, feisty female vocalists in Carrie Underwood, Miranda Lambert, and the Wreckers. However, by making the recently platinum Taking the Long Way an adult-contemporary album, and frankly addressing their recent history in the lyrics, the Chicks have tapped into a VH1-friendly fan base more in line with their beliefs and equally willing to buy their music. Moreover, Maines' comments helped wedge open a door of dissent that was slammed shut after 9/11 but is now permanently ajar. Speaking out is her constitutional right, and ironically, the uproar surrounding "We're ashamed the president of the United States is from Texas" has helped create an environment where, for the hour or two the Chicks are onstage each night – Frank Erwin Center, Monday, Dec. 4 – band and audience alike are satisfied to let the songs speak for themselves.

Country singers running for governor, privately funded musicians' health care, singer-songwriters earning a decent living: Small wonder The Onion decided to open a branch in our topsy-turvy town. Sadly, as the hilarious fake-news tabloid will discover, the line between satire and reality around here is already hopelessly blurred. Some possible forthcoming headlines from the Chronicle's new neighbor: