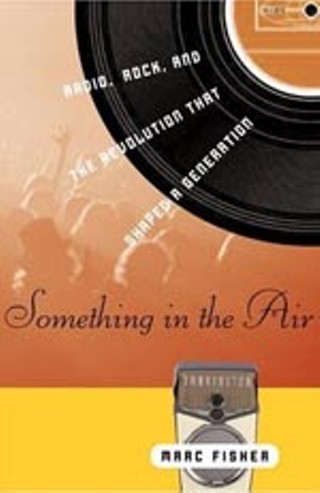 Something in the Air: Radio, Rock, and the Revolution That Shaped a Generation

Though it reads for stretches like a particularly well-cited eulogy, Washington Post columnist Marc Fisher refuses to pronounce his true love dead in Something in the Air, choosing instead to offer other, often pat, pronouncements. "Radio isn't what it used to be, but it never really was," he writes late while discussing Clear Channel, satellite, and podcasting. "Despite its troubles, radio is as much about the future as it is about the past." Perhaps, but it's tough to tell from this solid anecdotal history sagging with nostalgia. Fisher profiles postwar radio men with microphones – Todd Storz, Hunter Hancock, Cousin Brucie, Alan Freed, Jean Shepherd, Tom Donahue, Bob Fass, Lee Abrams, Paul Sidney, and even Austin's Dr. Hepcat for a few pages – and ties their trajectories to those of Top 40 radio, civil rights and the Sixties, the Federal Communications Commission, and beyond. In doing so, he attempts to convince that American pop culture as we know it is the product of slick, creative marketing and innovative media strategy, outcast voices in the night, and desk-to-dance-floor community-building. By no means has he failed – this is a fun book full of great moments – but he hasn't found a strong signal, either.