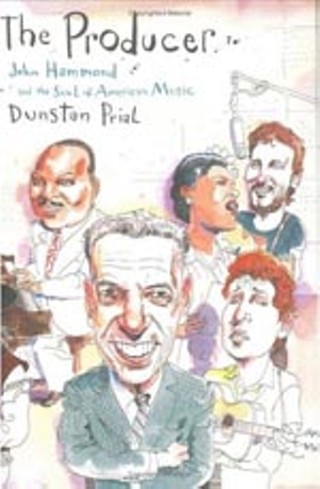 The Producer: John Hammond and the Soul of American Music

In the final lines of Dunstan Prial's zippy, ultimately astute biography of the 20th century's most prescient music talent scout, the author ascribes the crusading Vanderbuilt scion a singular place in American civil rights history. By championing Austin-born pianist Teddy Wilson to his future brother-in-law Benny Goodman, John Hammond directly, and, more importantly, with intent, helped break the race barrier on stage more than a full decade before Jackie Robinson's Brooklyn Dodgers proved equally color-blind in 1947. So much for jazz doubling as America's pastime. It was Hammond's certainly, a lifeline out of the family's Fifth Avenue mansion in Manhattan, where the rhythm and blues of the kitchen tracked straight uptown to Harlem. "Absolutely overwhelmed" stamps his initial discovery of Billie Holiday. Hearing Count Basie on his tricked-out car stereo, he raced to Kansas City sight unseen. Charlie Christian, the patriarch of modern electric guitar, another virtual unknown the Columbia Records man brought to Goodman. Prial's "Second Act," three quarters in, races through Hammond's "discovering" Aretha Franklin, Bob Dylan, Bruce Springsteen, Leonard Cohen, and finally bookend device Stevie Ray Vaughan at the expense of The Producer, who was anything but a studio craftsman yet so much more than a music industrialist.