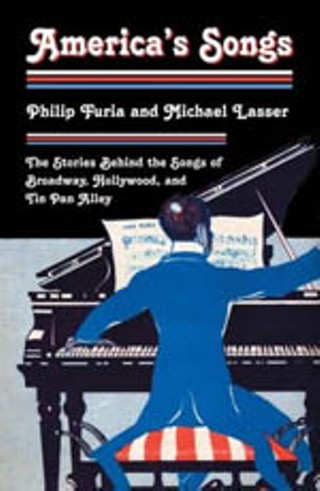 America's Songs: The Stories Behind the Songs of Broadway, Hollywood, and Tin Pan Alley

by Philip Furia and Michael Lasser

As integral to the identity of 20th-century America as Prohibition, the Cold War, or the New York Yankees, the songs of Tin Pan Alley are the closest things we have to a national poetic language. Let the English have their Wordsworths, their Shelleys, their Gilberts & Sullivans. Irving Berlin, Rodgers & Hart, Cole Porter, and the Gershwin brothers are our guys: sons of the American immigrant experience who created a new musical vernacular by combining the formality of high European romance with the wit, urbanity, and unmitigated moxie of the modern American city. The results are a collection of songs that have since become immortal ("Night and Day," "Blue Moon," "My Funny Valentine," and a thousand others), interpreted by countless singers and jazz musicians in countless bars, nightclubs, and concert halls around the world – wherever a heart is breaking. America's Songs doesn't claim to be an exhaustive historical text or a work of high intellectualism. Rather, it's an anecdotal trip through the creation of some of the greatest compositions of our recently deceased century, a trip filled with classic collaborations, booze-filled inspiration, and moments of almost divine serendipity.