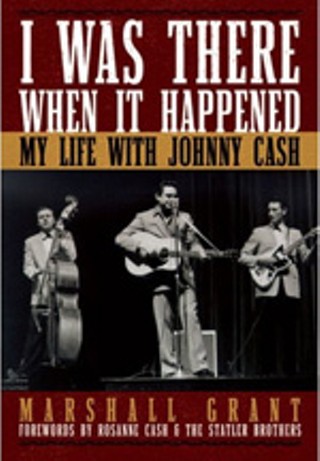 I Was There When It Happened: My Life With Johnny Cash

by Marshall Grant with Chris Zar

Marshall Grant played bass in Johnny Cash's Tennessee Two for nearly 30 years, during which time he bore witness to the rise of one of the greatest songwriters of the 20th century and to his long, drug-induced decline and fall. In addition to being a lovingly drawn firsthand account of life on the road, Grant's I Was There When It Happened (a title taken from the gospel song Cash and his band first played for Sun Studios founder Sam Phillips) is a cautionary tale for anyone thinking about cultivating an addiction to amphetamines: Taken together, the stories in this book are enough to make even the most decadent man swear off good times forever. What Grant lacks in writing ability he makes up for in enthusiasm and an archivist's attention to detail. Whether recounting the serendipitous creation of the famous Johnny Cash "boom-chicka-boom sound," the first fateful meeting of Johnny and June Carter, or fascinating incidents in the lives of music legends (like Elvis Presley building a career on the severely injured back of Carl Perkins), Grant approaches his book like a born raconteur telling tales over a bottle of whiskey.