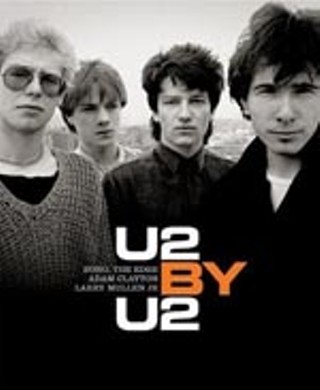 As big as the band itself, U2 by U2 is so massive it can hardly be done justice in a short-form review. So here's "In the Name of Love," a midpoint chapter whose oral history traces the genesis of 1984's The Unforgettable Fire through the Irishmen's star-making Live Aid performance in July 1985. The Edge has just had his first child. Larry Mullen adds "Junior" to his name so his dad won't get his tax bills. First-time producers Brian Eno and Daniel Lanois bunk down in manager Paul McGuinness' mews (i.e., stables). Bono says the album's theme is "a flirtation with death, nuclear fission, raw materials," but admits, "I'm not sure how much of that is articulated on the album." The title track was inspired by their Japanese publisher, "Bad" by heroin-plagued working-class Dublin, and Bono's crowd-surfing Live Aid theatrics nearly caused the Edge, Adam Clayton, and Mullen to fire him afterward. The other 11 chapters are similarly exhaustive (and exhausting); there's so much copy here – not to mention about 1,500 photos, many never before seen – that even the famously taciturn Mullen seems loquacious. Hefty as it is, U2 by U2 is without question the pièce de résistance of any true believer's library.